EXPRESS – 06/03/2020: In the midst of coronavirus pandemic and protest followed by riots, we have yet another Donald Trump controversy. It would seem that POTUS forced his wife to smile during their visit to the national shrine to Pope John Paul II.

This was a second visit to a house of praying by Trump in the last two days. Yesterday President ordered the police to disperse the protesters, gathered outside of the White House, with tear gas and rubber bullets. This was don to ensure Trump’s safe passage to St. John’s Episcopal Church. 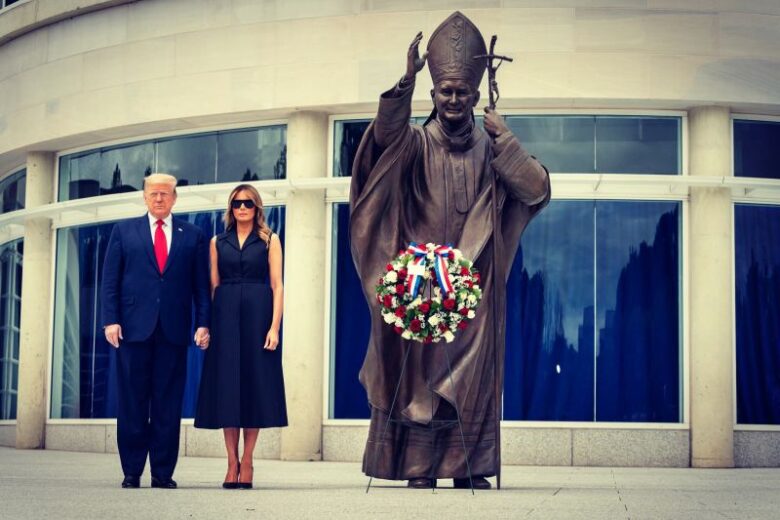 Donald Trump and the First Lady, Melania Trump, were taking photos outside the church while protesters were on the streets trying to get attention to racial injustice and police brutality, which are again in focus after the death of George Floyd.

While a visit as this one would be routine at other times, it was surprising during these hard times. It didn’t help that Melania wasn’t thrilled being present, and Donald even forced her to smile to the cameras. Before photo-shooting, Melania was dead serious, but after a remark by POTUS, she put a grin on her face.

As it’s usually the case, this didn’t go unnoticed by netizens. Twitter users were quick to comment that she only started smiling after she was ordered to. One Twitter user noted: “Donald Trump tells Melania to smile during today’s photo-op, but she can’t even fake it.” Another one added: “I hope she is okay. She looks nervous and unhappy.”

.@POTUS & I honored the life & legacy of Saint John Paul II at @JP2Shrine today. His passion & dedication for religious freedom is a legacy that we must protect for people around the world. pic.twitter.com/XsgrIc7QnC

Melania Trump dedicated a Twitter post of her own to the event by saying: “@POTUS & I honored the life & legacy of Saint John Paul II at @JP2Shrine today. His passion & dedication for religious freedom is a legacy that we must protect for people around the world.”