CNN – 04/15/2020: Another day, another statement withdrawn by Donald Trump. In a few weeks, he’ll probably act like he never said anything about the total authority. We are talking about Trump’s belief that he holds absolute power on the matter of reopening of the Unite States. POTUS now admitted that he couldn’t influence or rush individual states into opening the economy if they feel the time isn’t right.

But, there are things President Trump is not ready to admit just yet. Trump reinstated that his authority reacted to coronavirus pandemic in due time, disregarding his slow reaction and weeks of downplaying of COVID-19. The majority of the blame, POTUS, now puts on the World Health Organization. In addition to WHO, part of the responsibility, according to Trump, goes on the Democrats, state governors, former President Barack Obama, fake news, EU, and of course, China. 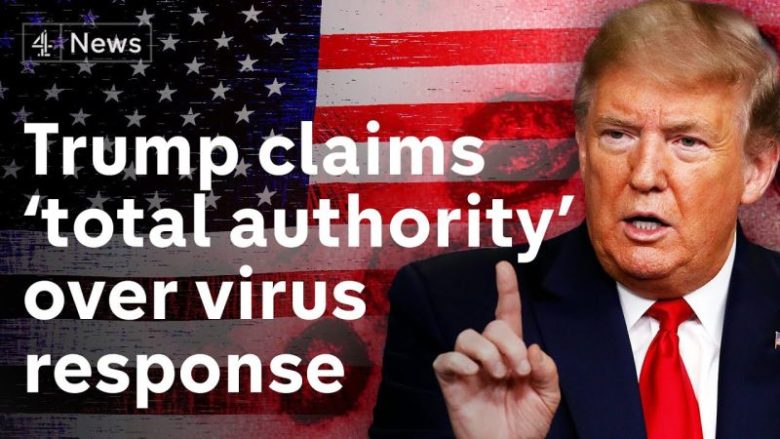 COVID-19 is still raging across the United States, and some governors are not ready to open their states before they are sure that it’s safe, directly contradicting Trump’s plans to open the US in May. Despite the conflict, President Trump backed down on his words that he holds the total authority on the matter.

But, as it’s usually the case, the 45th US President decided to alter the constitution by saying he is: “Authorizing each individual governor of each individual state to implement a reopening and a very powerful reopening plan of their state.”

Donald Trump now has his focus shifted from reopening the economy to criticizing WHO for their slow response to the coronavirus outbreak. According to Trump, the WHO didn’t react fast enough, and when they eventually did, their primary focus was China. According to POTUS, WHO is responsible for most deaths caused by COVID-19: “It would have been so easy to be truthful. And so much death has been caused by their mistakes.”

The attitude by Mr. President is not the right one, as the entire country is in chaos due to the rapid spread of coronavirus. At the moment, there are more than 600,000 infected only in the US, with more than 25 thousand deaths.

When a Kardashian Daughter Celebrates Her Second Birthday