EXPRESS – 01/18/2020: Melania Trump decided to channel her inner Marilyn Monroe. She probably did it unintentionally, but it happened anyway. The Hollywood moment occurred when the First Lady, accompanied by her husband, Donald Trump, and their son Barron Donald was leaving Air Force One.

While exiting the plane, Melania’s Carolina Herrera white dress went up due to the wind. The awkward situation occurred in Palm Beach, where the Presidential couple decided to spend the weekend at their Mar-a-Lago resort. It was the last chance they had to have some rest before impeachment trials, and then this little gaff happened. 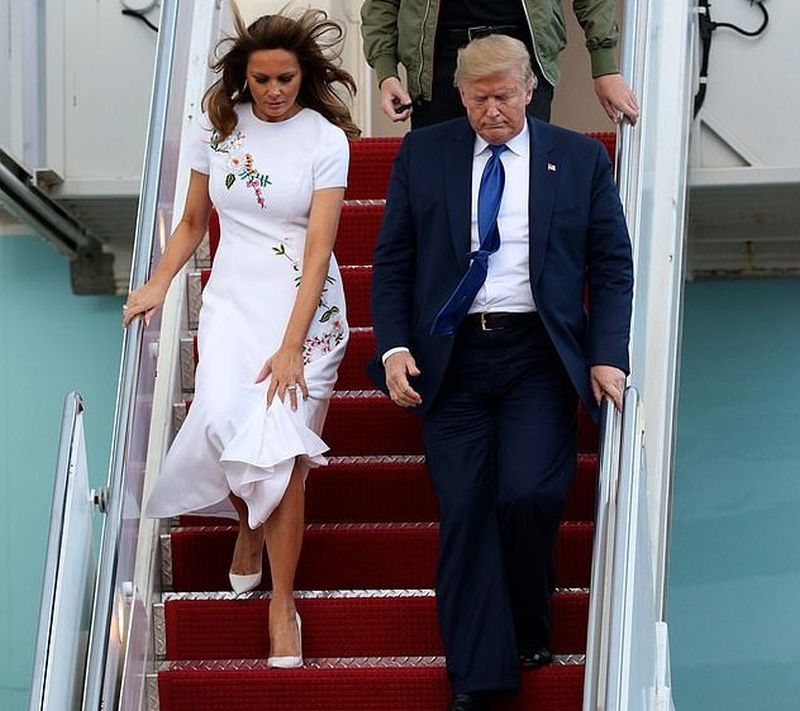 Barron Trump was dressed in a manner similar to his mother. This can be a sign that his mother is in charge of his clothes. Dressed in a black t-shirt, olive-green jacket, and black jeans, while wearing black New Balance shoes, Barron carelessly waived the reporters. President’s son made a funny statement claiming that his living quarters were downgraded when he moved from Trump Tower to the White House.

Read More: Is There Truth in Rumors That Melania Trump is Pregnant?

Unlike Marilyn Monroe, the First Lady Melania Trump managed to control her dress despite wind’s efforts to make a situation that could turn out to be an epic photograph. With her quick reaction, the skirt moved only a little up her legs before she stopped it, and a controversial situation in which we could possibly see the First Lady’s underwear, or lack of it, was averted.

Donald Trump and his son Barron Trump failed to notice anything happening, for better or for worse, as the family slowly came down from the plane. If this situation played out to the end, the newspapers would have so much more to write about in addition to Trump’s impeachment trials, and escalating situation in the Middle East.

The way it played out, we are left with one big what could have been.

Do You Know How Much Donald Trump Earns as a President?