Billie Eilish has won New Artist of the Year and Favorite Artist Alternative/Rock Award at the 2019 American Music Awards. It was her first AMA’s, and she enjoyed it like anyone else.

The 17-year-old pop star delighted her Instagram followers with pictures from the red carpet.

Eilish came at The Microsoft Theatre in LA in head to toe Burberry outfit, which reminded some of the fans of a cozy pajama. She also wore a pair of snickers with a white platform and the same Burberry pattern. What drew the most attention was her chain mask – the white bonnet styled hat featuring a sparkling veil. The young singer performed on stage her new song, “All The Good Girls Go To Hell”. Billie was wearing a long shirt with a political message: “No music on a dead planet” surrounded by glowing flames. The fire was not only on her outfit, but the stage was also lit up in flames. 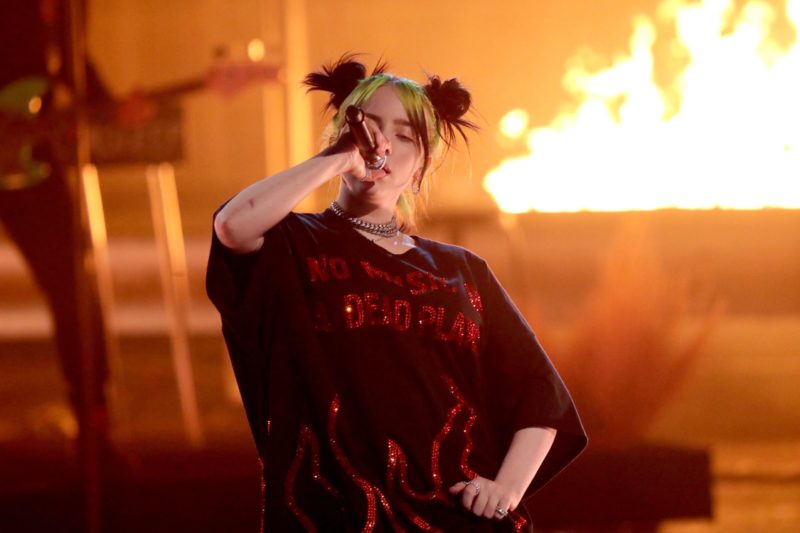 Billie shared on Instagram a short video of Tyler, the Creator, introducing her performance. She captioned the video with: “I know Tyler probably don’t care how excited I am about this, but he is God to me and the fact he even knows I exist is crazy to me.”

also i know tyler probably don’t care how excited i am about this lmao but he is god to me and the fact he even knows i exist is crazy to me… everytime i see this dude ion know what to say thank you t u changed my life…. & sorry about your album?&&&&& my neck broke

She added at the end: “Thank you to the fans and the supporters and anyone who gives a **** about me. I appreciate you. Thank you, guys!”.

The fans congratulated her in comments and shared their adoration for the teen pop star.