Another TV Show Hints at Dwayne Johnson as The US President

People believe certain things can be spoken into existence. One of those that are on a good road to happen in reality is Dwayne The Rock Johnson becoming the president of the United States. We hear more and more stories about it each day. It even became a certain meme in movies. The last one to suggest that there’s a chance of The Rock becoming the head of the States is Sonic the Hedgehog. But this was merely a suggestion of things that might happen in Sonic. The movie we’re going to talk about here is going to push matters even further. In Legends of Tomorrow which is set in the future some twenty years from now, Dwayne Johnson is going to appear as the president.

If you have been following the media in recent months and even a few years, you probably noticed that Johnson’s name is popping up quite frequently when it comes to the presidential race. Some even tried to push the narrative of him running for the office in the next couple of years. Considering the trajectory of his film career it might be too early for that. But, if you look at the films we mentioned they see it differential. His role as the POTUS is pushed further in the future, by ten or even twenty years. This, of course, is a more realistic option despite we’re talking about the movies here. 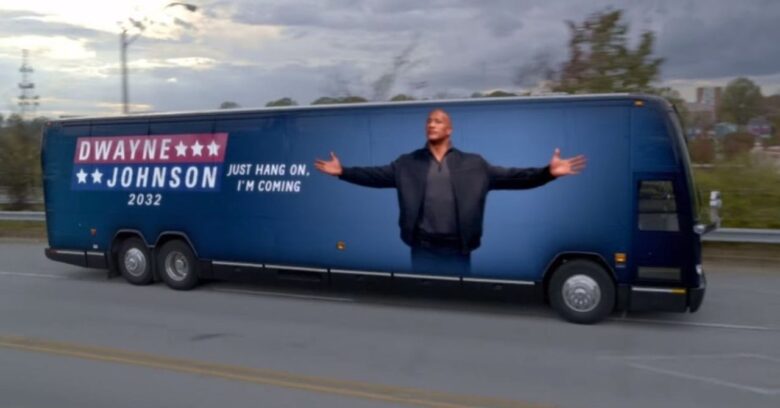 When the idea popped out for the first time, we all believed that it was all pure nonsense. But, as time passed on even the Fast&Furious star admitted that he’s attracted to such thought. If you take a look at the comments on his social media platforms you can see that the support for this idea as real as it can be. People would love to see Dwayne as the president. After all, we had a celebrity of sort as our last president. In the end that didn’t turn out all that well, but it is proof that people from the entertainment industry hold certain appeal with people. Of course, we also want to say that we believe that Johnson would be ten times better president than Donald Trump ever was.

Having Dwayne Johnson appear in a popular show such as Legends of Tomorrow, will only re-instigate claims that he should run for the office. After all, this is a very popular TV Show that already spans six seasons and it has been renewed for a seventh one. For a while, it was believed that the show was coming to its closure, but the writers are still managing to make the best out of the initial concept. The manner in which they create episodes was praised for its action, comedy, and superhero sequences. Despite the continuous quality, the ratings have been steadily dropping for a while. The goal is probably to reverse the situation with the inclusion of such a star of Dwayne Johnson’s stature.

As for Dwayne Johnson, the actor is thoroughly preparing for his role of Black Adam in the upcoming antihero film. He’s been treating his fans with videos of his workout routine and diet plan that he designed specifically for this role. After seeing some of the initial shots, and how Shazam! turned out we can’t hide the fact that we’re burning with excitement to see what The Rock has in store for us. The former wrestler is well known for his dedication to all roles he brings to the screen, and how well it translates to the box office results of his films. While an amazing actor at the moment, we can also admit that seeing him sitting behind the desk in the Oval room would be a sight to behold.