SKY NEWS -03/09/2020: Twitter has a new option, and we are glad they do. Now, you will have videos shared on this platform, which will be labeled as manipulated. This novelty is already in use, and you won’t believe which video got this tag first.

A video shared by White House communications chief was labeled as manipulated media. You won’t be surprised to hear that Donald Trump rushed and shared this video on his profile. Despite it being described as manipulated, people shared it so much that it became viral. More than six million people already watched it. 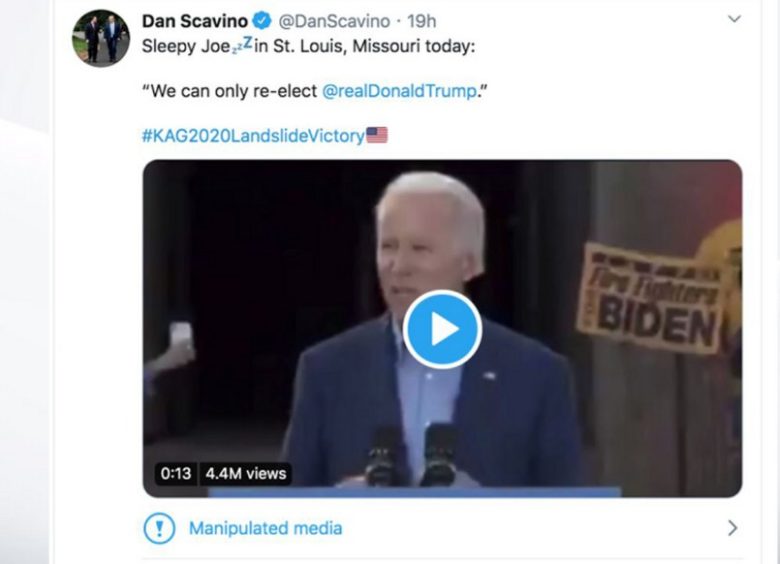 The clip in question is one showing Joe Biden and was first published on Saturday. The White House social media director, Dan Scavino, was the one who shared it because it truly is misleading and works in Trump’s favor.

Read Also: Is Trump in Denial Regarding Coronavirus, or is He Straight Out Lying?

The part that Biden says about Trump was spoken in Missouri during Biden’s rally. If you watch the whole thing the Democrat presidential candidate actually says: “Excuse me. We can only re-elect Donald Trump if in fact we get engaged in this circular firing squad here. It’s gotta be a positive campaign, so join us.”

Just in: Twitter applied its new manipulated media label for the first time to a deceptively edited video of Joe Biden. It was shared by White House social media director Dan Scavino, and retweeted by the president. pic.twitter.com/PggcCwMNkx

The video started to gather attention quickly, and Twitter’s new option went into motion. After it was reshared multiple times, and even by the US President Donald Trump, it was labeled as misleading media. This way, Twitter plans to eradicate content that has the intention to mislead the public.

President Trump, a hypocrite who hates fake news, was quick to share this. Of course, he was, when it suits him. It’s only important to the President that coronavirus is a Democrat hoax and part of their fake news.

How Much Pay-Scale Can a Project Manager Expect in India?

What Is Madonna’s Secret Diet?