Trump Plays Dumb When Asked Where Disinfectants Idea Came From

Donald Trump and accepting responsibility doesn’t go hand in hand. POTUS refused to take the blame for people who took his advice and started treating coronavirus with disinfectants. If you recalled only a few days ago, Mr. Trump suggested that people could inject themselves with bleach to try and cure COVID-19.

During the Tuesday press conference, a reporter asked Trump what he thinks of people of Maryland who called COVID-19 emergency line with questions about the poisonous disinfectants and why they are doing it, to which POTUS replied: ‘I can’t imagine why. I can’t imagine that.’ 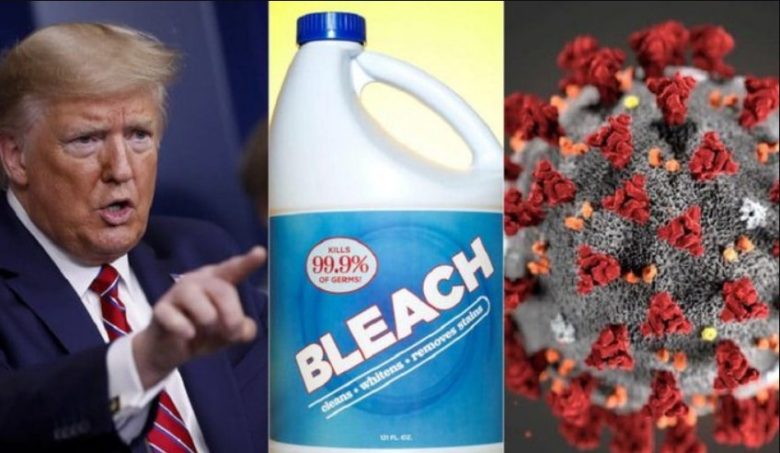 After Trump suggesting that disinfectants could be used as a treatment for coronavirus, local authorities across the United States had to issue warnings and warn people against taking such actions. Trump was pressed to answer if he feels responsible for people who call and ask for disinfectant treatment of COVID-19 to which he replied: “No, I don’t.”

This comes as hypocorism from Mr. President as he was thrilled with the idea only a few days ago: ‘Supposing we hit the body with a tremendous, whether it’s ultraviolet or just very powerful light? And I think you said, that hasn’t been checked out, but you’re going to test it. And then I said supposing you brought the light inside the body which you can do either through the skin or in some other way. And I think you said you’re going to test that too.”

Last week when talking about the disinfectants, Donald Trump sounded like he has a revolutionary cure on his hands: “And then I see the disinfectant, where it knocks out in a minute, one minute, and is there a way we can do something like that? By injection inside, or almost a cleaning. As you see, it gets in the lungs, and it does a tremendous number on the lungs. So it would be interesting to check that.”

Fast forward for a couple of hours, and the President was claiming that he was sarcastic when talking about disinfectants. Add a couple of days to it, and now Trump almost acts like he never uttered such nonsense.

In a Dangerous Move, POTUS is Pushing For Reopening of Schools