After a long-time relationship with Marlen P, Anthony Davis decided to tie the knot. The ceremony was a glorious one, and the NBA superstar had many other stars in attendance. Those that stood out are, of course, his teammate LeBron James, and singer Adele who is dating an NBA agent Rich Paul.

In addition to many players, who shared the court with Davis, there were a few celebrities in attendance. The world of entertainment gathered to pay respects to the newlywed couple. Like we already mentioned, the King was there together with another Laker Russell Westbrook, and so was the Grammy winner Adele. Anthony, who was the first selection in the 2012 NBA draft wore a classic black tuxedo, while the bride had a white wedding gown. 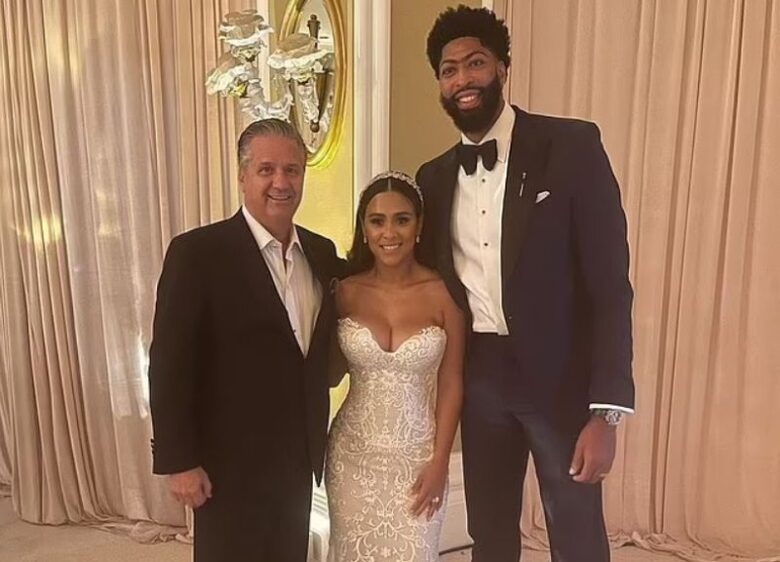 His outfit was changed for the rest of the evening with the focus being on a regular black suit and Air Jordan shoes. After all, we are reporting from a basketball player wedding, so some sneakers were to be expected. The couple only now had their wedding ceremony and wows exchanged, but they have been together for a while now. What’s even more interesting about them is that they have kept themselves away from the public.

The couple has been together for some time now with their relationship starting somewhere in 2016 or 2017. But, the first public appearance for the couple was in 2022 at the Vanity Fair Oscars Party. Despite remaining away from the spotlight, it is known that they share a daughter, Nala, which came to this world in 2017.

While we shouldn’t take anything away from Davis and Marlen P, there was yet another couple at the ceremony that drew the attention. Adele and Rich Paul have finally come out of the closet, and so we have witnessed their first photo on Instagram. Paul was at the wedding as he’s the representative of the groom, and the man responsible for his trade to the Los Angeles Lakers. The pair have been together for a few months now, with things getting fully official just now.

The Lakers as an organization could have great benefits from this wedding, which is not something many people realize right now. Having people together like this is amazing for building chemistry. LeBron James and Russell Westbrook even came to the ceremony in one car. With the LA franchise being favorites for the NBA ring, building a rapport together is what they need considering there are many new players in the team. James is entering the summit of his career and if he wants to have a chance at being crowned the GOAT anytime soon, he needs a few more rings.

We can say that Davis and LeBron already have a great relationship on and off the field, even if Dais didn’t invite him to be his best man. Well, it’s good to know that inhumanely beast LeBron doesn’t fill all the standards.