Home News VPN vs Proxy: Which One is Better?
NewsTech

VPN vs Proxy: Which One is Better?

Is a car better than a bicycle? No, right? It actually depends on what the user is looking for?

Both a bicycle and car are very different pieces of machinery. They are used for similar and yet different purposes. If you are looking for speed and comfort, a car is a far better option. But if you are looking to exercise, recreation, save money on gas and save time on traffic jams, then a bicycle is ten times better.

Well, we can draw a similar comparison about a VPN and proxy. Both technologies were created for different purposes, applications, and yet they are compared as if they were in the same niche. What confuses people is rooted in their similarities, both a VPN and proxy server provide a certain degree of Internet anonymity.

If you connect with either a VPN or Proxy, you will access the Internet anonymously. How each technology accomplishes this, is the big difference.

In this post, we’ll dive into VPN vs Proxy, what is the difference between a proxy and a vpn? Which is better, a proxy or vpn? Yet, most important, which one is better when, how, and to whom?

So, what is a proxy server?

A proxy server acts as an intermediary or gateway between two networks, like your private network and a public network, aka., the Internet. Its purpose is to serve as a central point for service requests and responses between these two networks. This intermediary is perfect for simple functions like anonymous web browsing, circumventing censorships and geo-restricted content, and even to restrict access to services and resources.

There are many different types of proxies, but the most popular is the forwarding HTTP anonymous proxy, which re-routes and masks the IP of incoming requests from clients. This type proxy is capable of bypassing geo-restricted content like Netflix or Prime, network restrictions, and censorships.

Look at the forwarding proxy example, from the screenshot below. Without a proxy (red), the school’s firewall filters and blocks a Facebook request. But the school’s firewall is “permitting all” traffic with some exceptions, like probably all kinds of social media. So, the firewall doesn’t know about the proxy server, so it allows the connection.

Other proxy types are the reverse proxy which is often used to enforce restrictions of Internet usage (opposite to forwarding). This type of proxy may be helpful when employers want to limit certain time and websites to employees in an internal network.

A Virtual Private Network (VPN) uses the client/server communication model to create an encrypted tunnel between this client and server. The client VPN installed on your computer, mobile, desktop, etc., uses an encryption key, which is also known by the VPN server, to cipher (scramble) all outgoing traffic.

Once a VPN tunnel is established, your entire Internet connection will be encrypted.

What is the VPN tunnel, and how is it created?

The VPN establishes the tunnel (either on TCP or UDP) and then encrypts all the native application’s data inside this tunnel. The TCP or UDP segment along with its data (source IP, MAC, etc) will be scrambled with code.

Still, the encrypted IP packet needs to be forwarded to the VPN server. To do this, the VPN client encapsulates the encrypted segment with new information, including TCP or UDP tunnel, the VPN server’s IP, and more. It will use the public network’s infrastructure, including Internet gateways, the public WiFi router, the ISP’s network, and so on. Anyone, a Man-In-the-Middle (MIM) could still intercept the traffic, but will be unable to decipher it, without the key.

The screenshot above, shows how VPN helps a remote user with an OpenVPN client, use a public network (Internet) to securely connect to an internal LAN, via the OpenVPN server. Only the client and server know the key (or certificate), so they can create a site-to-site tunnel.

VPN vs Proxy: Which one is better, when and where? 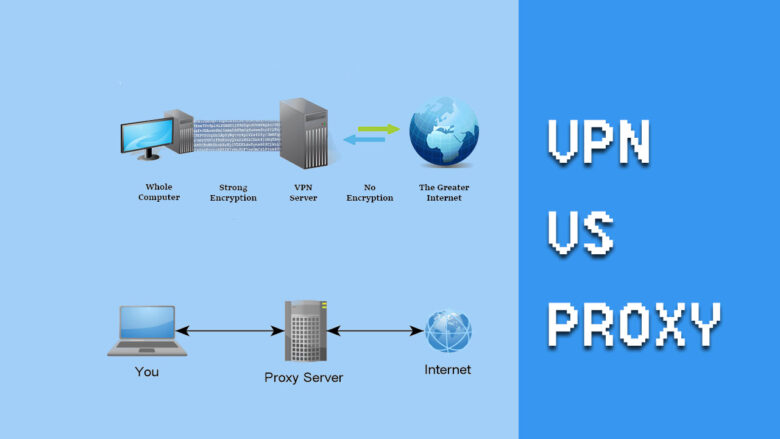 So now that you know what is a VPN and what is a proxy server, let’s define their differences. These differences make one technology better than the other in different cases.

VPNs are far superior than proxies if you are looking for high end-to-end privacy while connected to the Internet. Additionally, if you are traveling and need secure remote access to a corporate network, VPNs are the way to go. But if you are looking for a tradeoff between flexibility, speed, anonymity, and price, a proxy is a better option. Anonymous proxies are common for spoofing locations and bypassing restricted content.

What Can Consumers Expect from Subscription Payment Solutions – 2022 Guide