Today marks the third birthday of Prince Louis of Cambridge. As always Duke and Duchess of Cambridge realised the official photo to mark his birthday. Prince Louis is the fifth in line for the throne and he is three today.

The Duchess is usually the one who takes pictures of the members of the Royal Family, and it’s not different this time.

Kate took a picture of a young Louis on the grounds of Kensington Palace on the first day of his nursery school. The youngest Prince is attending the same nursery as his sister Charlotte did.

We rarely see the glimpse of younger Royals, but here are some of the photos of the young Prince Louis since the first time he was introduced to the public.

The Day of Birth 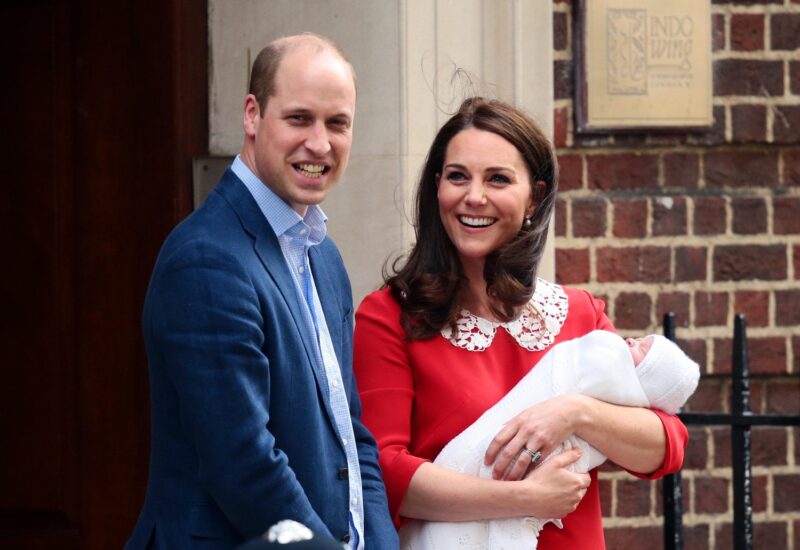 Prince William and Kate welcomed their third child on April 23, 2018, at St Mary’s Hospital in London. A few hours later, the Duke and Duchess went out of the hospital to present the little prince 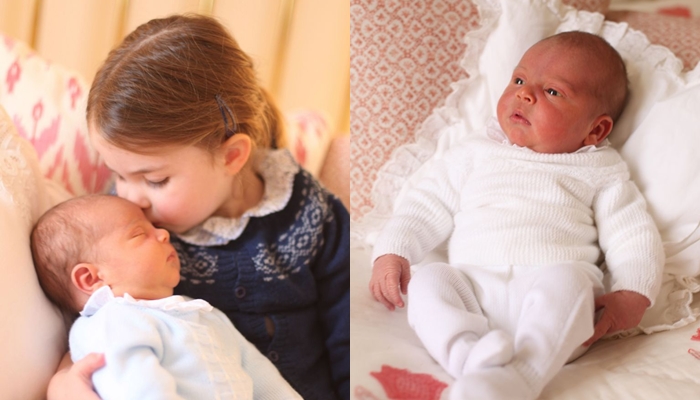 Just two weeks after his birth, the Duchess released two new photos of little Prince.
The first one was with his big sister Charlotte, giving him a kiss on the cheek. The photo was taken on Princess Charlotte’s 3rd birthday. The second photo was his first official portrait where William and Kate thanked the public for the kind messages. 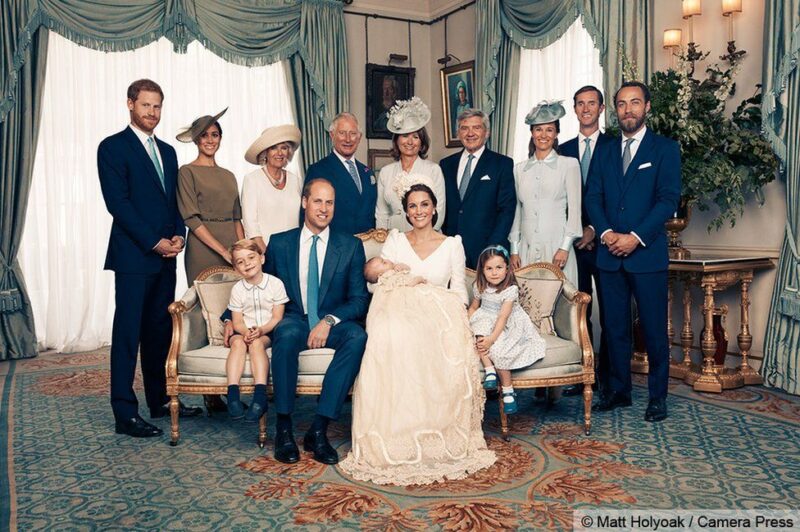 Even though Prince’s Christening was marked with Princess Charlotte’s adorable ‘You’re not coming to the press, the baby Louise looked calmed and sweet in his official Christening photos. The Palace released few photos from the christening including the one with the whole family and a family portrait of the Cambridges. 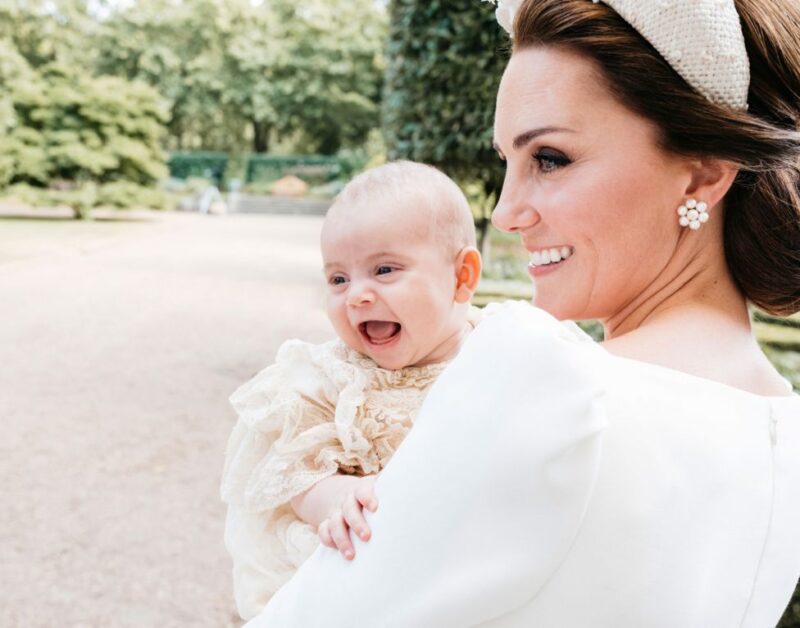 This was probably the first photo where we can see Prince Louse smiling and cuddling with his mother. This photo was also taken on his Christening day.

Prince Louis stole the show in never-seen-before photos marking Prince Charles’s 70th Birthday. We can see him grabbing his grandfather’s nose which made everyone laugh. Prince Charles shared another sweet photo of him with the young Prince. The baby is snuggling with his grandpa who is obviously enjoying his time with grandchildren.

The first official Christmas photo for the baby prince was shared on the Kensington Royal official Instagram page. The eight-month-old prince looked adorable in a blue sweater and navy outfit. 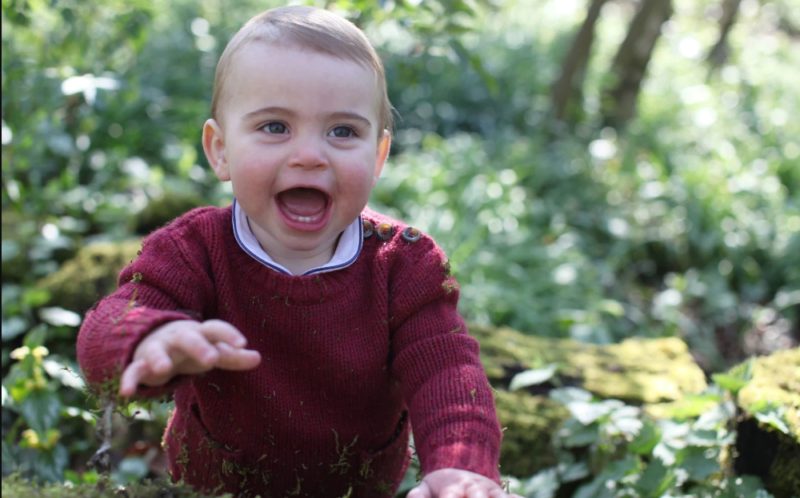 Official photos for the first birthday of Prince Louis were released on KensingtonRoyal’s Instagram page. The sweet photo was taken by the Duchess of Cambridge earlier that month, at their family’s home in Norfolk. Louis looked so adorable in a red sweater and with his two teeth. 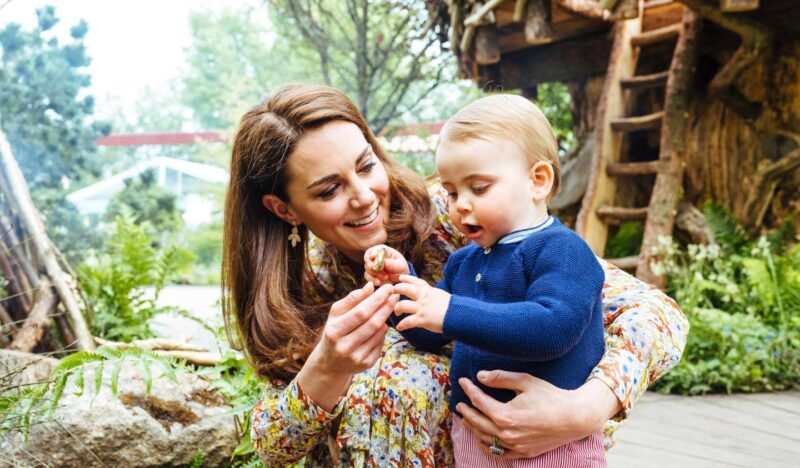 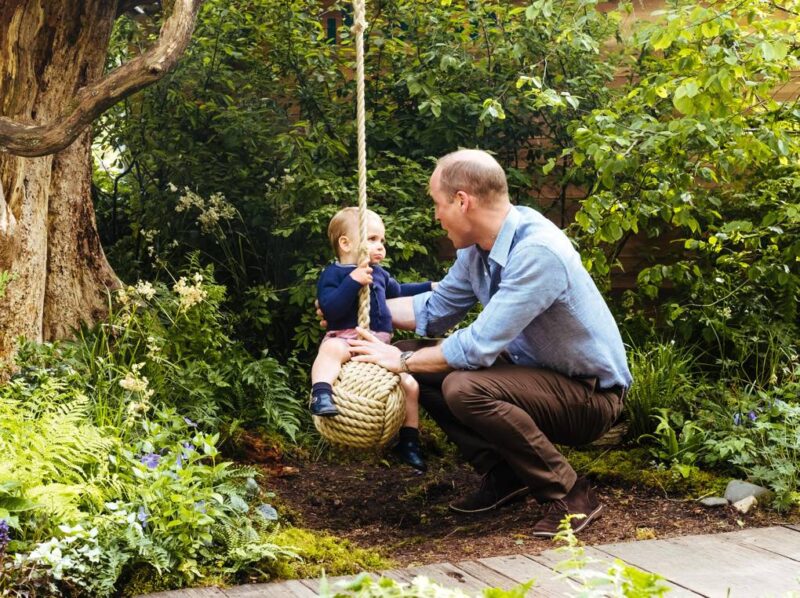 The photos were taken at Kate’s garden at Chelsea Flower Show. In this photo, we see Prince Louis’s first steps while his father is watching over him.
While visiting the garden, children were gathering pebbles and sticks, and swinging on a lovely rounded swing. We can see young Prince inspecting a rock with his mother. 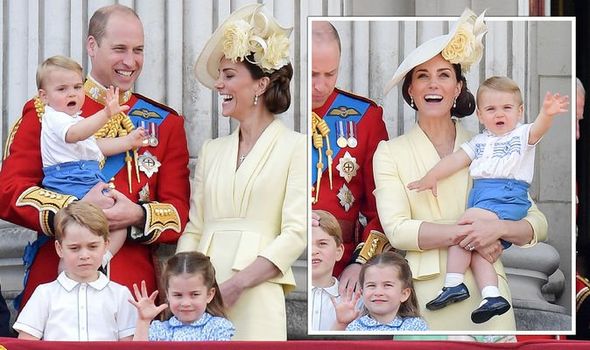 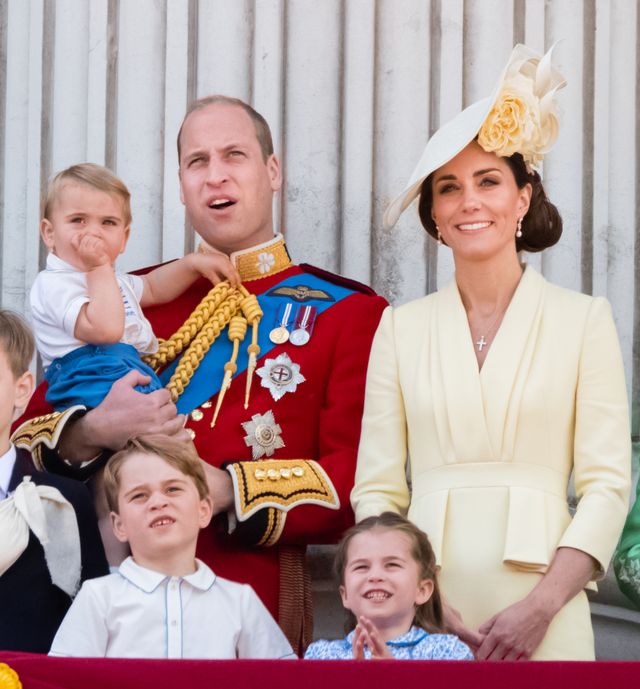 Prince Louis had his debut at Trooping of Colour in 2019. The one-year-old was waving and smiling during the annual parade. He was also clapping during the royal flypast. He enjoyed in his father’s arms, sucking his thumb while his parents smiled at him. 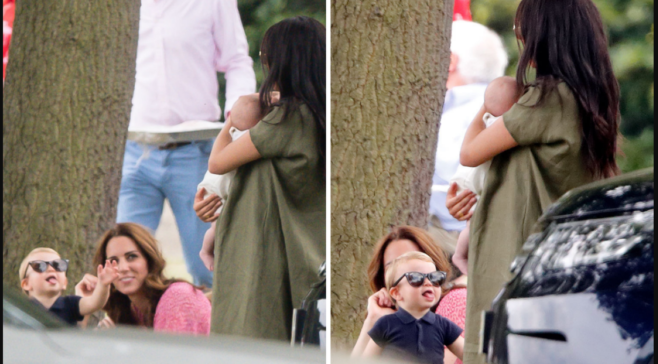 The Duchess of Cambridge brought the children to watch their father playing a polo match for charity. She was accompanied by the Duchess of Sussex and baby Archie. Louis was playing with his aunt and baby cousin wearing his mother’s sunglasses and sticking his tongue out.

The official 2019 Christmas photo features Prince William, George and Louis, with Princess Charlotte. The photo, taken by the Duchess earlier that year, captured the sweetest moment of Prince William kissing baby Louis, who seemed not interested in posing.

The three little royals took their part in the clapping for the NHS. The video showed the youngsters showing their appreciation for the worker. Prince Louis looked so cute, and this was the first time we saw him on video. 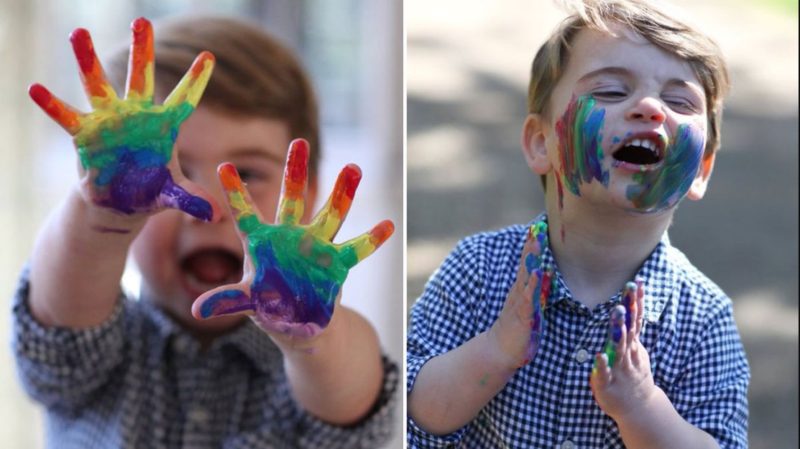 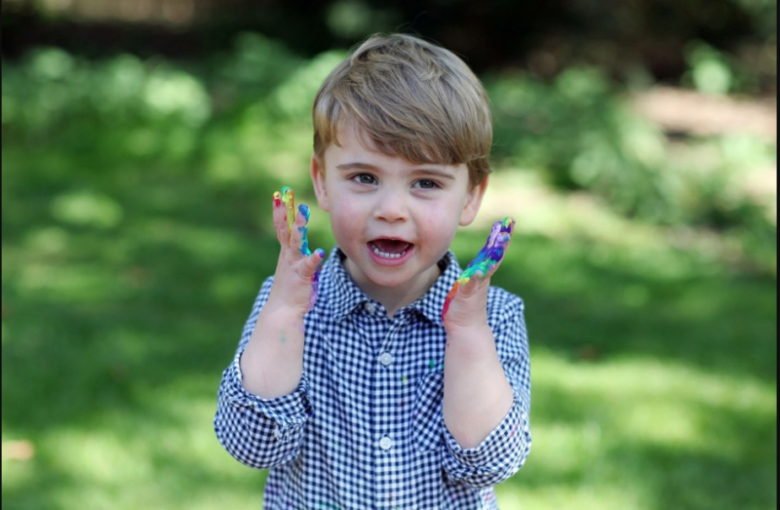 The official photos for his second birthday were taken by the Duchess. We can see Prince Louis being playful and enjoying his finger painting with rainbow colours. Little Louis celebrated his birthday in Norfolk, where he was staying with his family during the lock-down. A post shared by HRH The Duchess of Cambridge (@kate_middleton_royal_highness)

In September 2022, the Cambridge family was visited by naturalist David Attenborough. Later the Cambridges shared the video where children asked David questions about nature. This was the first time we heard Louis speaking and it was so cute to hear him saying “amimal”. 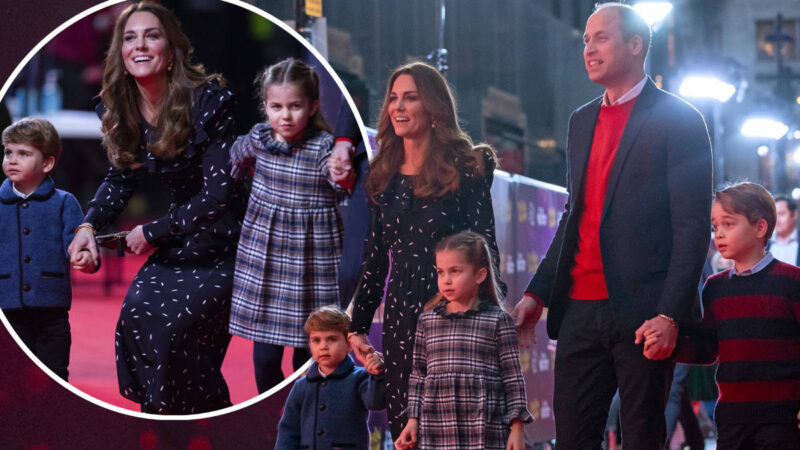 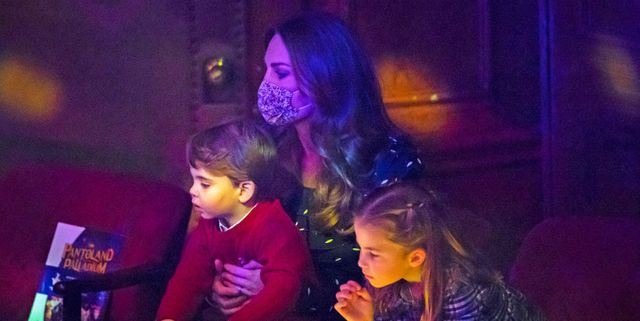 The Cambridge attended a special pantomime performance in London in December 2022. This was the first red carpet for the young Cambridges. Louise looked confused and shy while walking in the crowd. Different from his older siblings, the young prince was among the crowd for the first time. He really enjoyed watching the performance with his sister while sitting in his mother’s lap.

The latest Christmas card photo realised by KensingtonRoyal Instagram page features the Cambridge in a relaxed photo taken at their Northfolk home. Prince Louis seems like he is enjoying his time while taking a picture.

Prince Louis is a big boy now. In celebration of his third birthday, the Duke and the Duchess realised a photo of the young Louis on his bike. This photo was taken by the Duchess on the first day of the nursery. We wish him a very happy and joyful birthday and many happy days.

Why Are Bots An Essential Part Of The Sneakers World Now?