Joe Rogan is a popular person, even beyond the world of MMA. So, it’s no wonder many people are interested in his personal life. No, no one wants to reach too deep, but knowing where he lives, and what his house looks like would be nice, right? Yes, and that’s what we are going to discuss in this article. Of course, what you know is that he is a media personality, dedicated to the sport of mixed martial arts, and one of the global leading podcast hosts in this domain. You probably heard about The Joe Rogan Experience and his connections with UFC and Dana White. In the mid-time, he also acted in TV shows and movies such as Fear Factor, Venus & Vegas, and Zookeeper among his other roles.

While he has been around for a while the true cash came into his life after signings a deal with Spotify, which added a few mills to his bankroll. So, after hearing this, you won’t be too surprised to learn that he is living in a mansion. Let’s see what he has to offer in terms of location and space.

So, Where Does he Live?

Like many celebrities of his stature, he spent most of his prime years in Los Angeles. But, one can get enough of the City of Angels, and Joe certainly did. So, to change the scenery he decided to move to Austin, Texas. Not many celebrities would do this, but the climate is good, and the state is massive in more ways than one so that probably played a role. Another factor is of course lower taxes, so Rogan was able to afford a bigger house. He’s not the only one who thinks this way as he has a few high-profile neighbors, most notably Matthew McConaughey and Dennis Quaid.

Check Out His Austin, TX Home

It’s never easy to leave California, but when you are moving into a house like Joe Rogan’s new place, things are at least a little bit easier. After parting with almost $15 million, Rogan has a new house. It is an architectural wonder which spans almost 11 thousand square feet. It is placed on the shores of Lake Austin. Another celeb that lives nearby is Sandra Bullock. She can come over for a sleepover whenever she wants considering this place comes with ten bedrooms and ten bathrooms. Yes, you heard that right. Joe went away from the center of the world in LA, but he did it for a reason. According to Variety magazine, the mansion was built back in 2006 and was home to Benjamin Wood and his wife Theresa Castellano-Wood for years. The house is quite modern with gentle touches of the Far East. 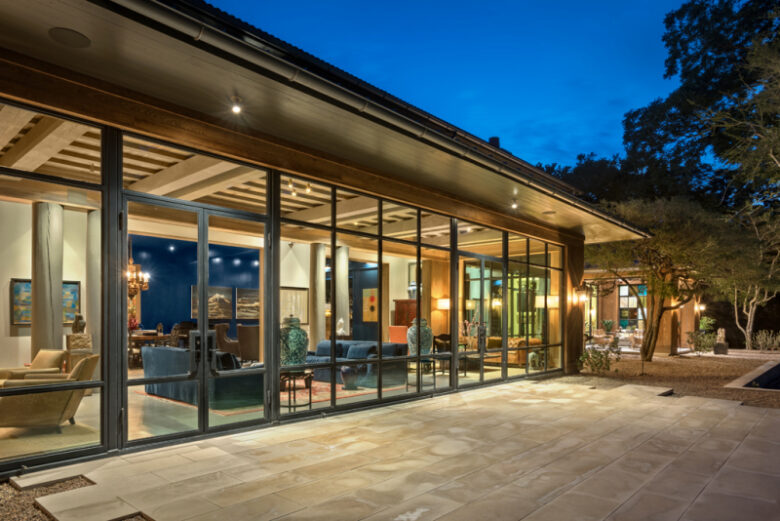 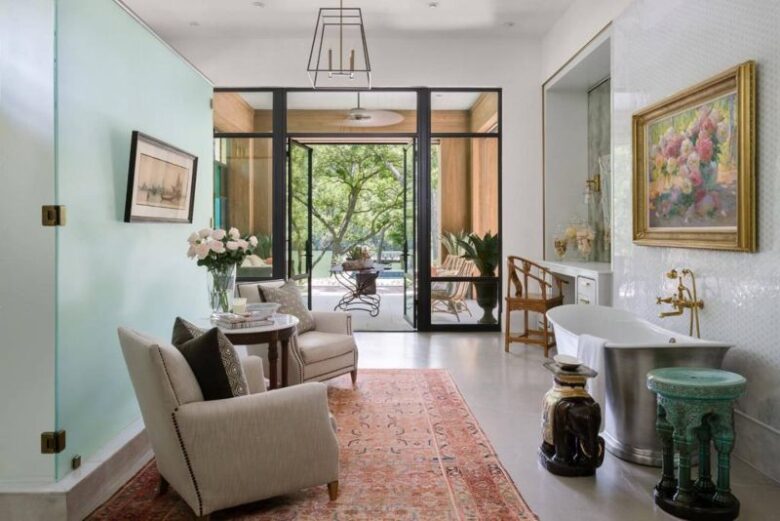 The interior is based on the open space concept, so you’ll find a very spacious kitchen, living room, dining space, and even a library. Everything has a touch of elegance which you can see in every room, some of which are decorated with fireplaces. Around the house, you’ll find many patios, which are accessible from both inside and outside. The house offers plenty of view through high ceilings and a lot of glass all around. Joe will learn to appreciate this as the landscape all around is amazing considering that there’s a lake nearby. As one could expect you don’t have to go all the way to the lake for a swim, as there’s a pool as a part of the mansion. It is accessible directly from an en-suite bathroom which is a part of the master suite, separated only by glass walls that are connected to the porch on the outside. Considering what Joe Rogan does for a living, you can already tell that he has a space dedicated solely for his podcast show, arranged in the manner he desired. There are speculations that his podcast room isn’t on the premises but we are inclined to believe that they actually are, at least in one of the two garages he has, or the carriage house. 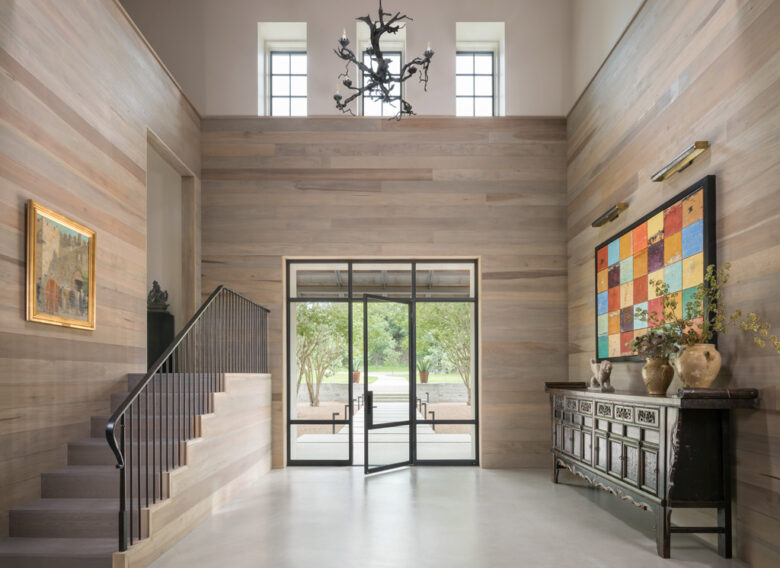 Back to his LA Home

The one thing you need to know is that Joe has two of them. He’s not shy about plashing dollars on a place he likes, so he parted with almost $5 million for a cliffside villa at Bell Canyon. Interestingly his original home is not far away. It is a true wonder of architecture considering its position. It offers a beautiful view of both the mountains and the sunset when you’re in the mood. There’s the place for all sports of enjoyment considering it covers almost 9 thousand square feet of space which translates to a chef’s kitchen, a massive family room with plenty of windows to enjoy the view, a garden built with zen in mind, and high-end security system. This home is not up for sale even after Joe moved to Texas. Instead, his second home is on the market. 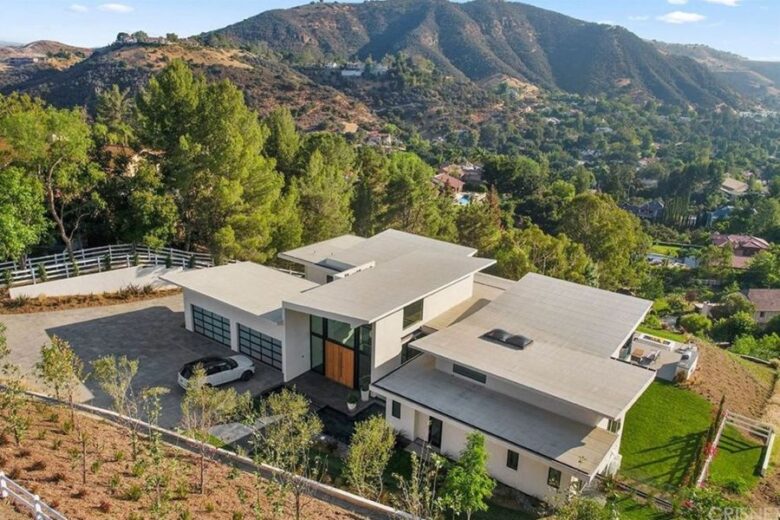 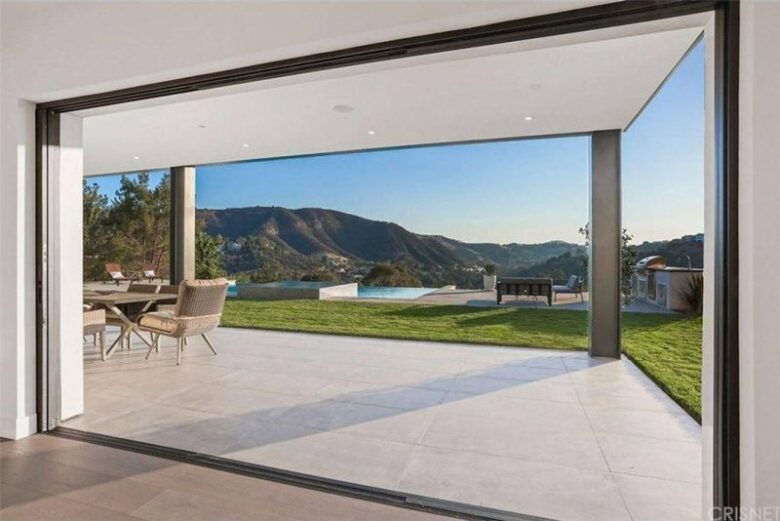 The other property this media personality owns in California is a San Fernando Valley Los Angeles property, which Rogan acquired back in 2003 for $2.3 million. The style used on this one is treated as french country-style, but with a few changes all done by Joe. In the end, it now looks like one of the standard homes in this area, and it’s where Joe and his family spent time for years. This home is no joke, and don’t let the price tag fool you, as we are talking about two decades ago. What you get with this house are five bedrooms, the same number of bathrooms, garage, big living room, and kitchen, all put together under 7,573 square feet. The master suite takes one whole floor, and it is amazing to see it in person, as it leaves a grand effect on people. It is an amazing property, which is now marketed for $3.2 million. The new home Rogan bought in Austin, Texas leaves little need for as many properties. As of now, it is still listed for sale, as no buyers came Joe’s way.

Do You Need To Be In California To Start A...

How to Choose the Best Training For Escaping Sexual Harassment...