Home Games In-Depth Jhin Guide: How to Play the Virtuoso like a Master – 2022
GamesTips

In-Depth Jhin Guide: How to Play the Virtuoso like a Master – 2022

In League of Legends, Jhin is a ranged champion who is best known for his high range and massive damage output. In this in-depth Jhin guide, we will cover Jhin’s strengths, weaknesses, and unique playstyle. Furthermore, we will discuss when Jhin may not be the best ADC to pick, depending on the enemy team’s composition. 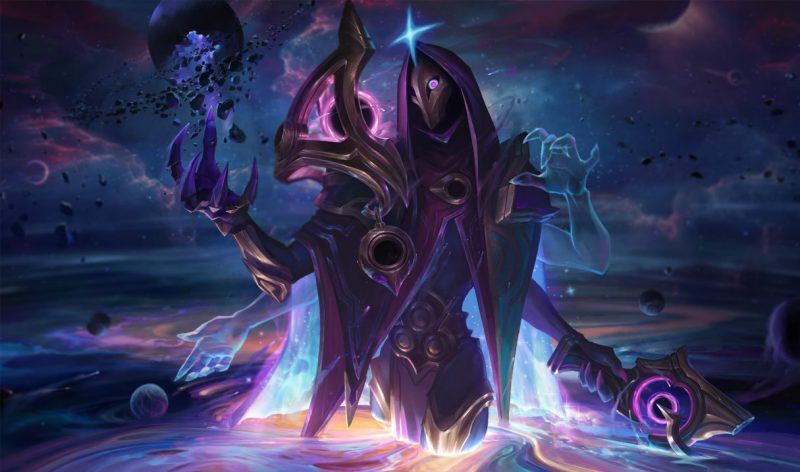 Jhin is one of the best late-game champions in League of Legends because his damage out scales his enemies as he builds more items. His damage grows exponentially with items that provide both critical strike chance and attack damage.

Therefore, you should include many of these items in your Jhin build. For up-to-date build suggestions on the best AD/critical strike chance items to focus on, you can check out the Jhin build guides on MOBA Champion.

Secondly, Jhin’s ability to immobilize enemies gives him a lot of extra flexibility. As long as your target was recently affected by ability or an auto-attack, he can root them with his Deadly Flourish (W) ability.

This is great to prevent weak enemies from escaping or strong enemies from closing in on you. Combined with his Captive Audience ability, he usually has enough breathing room if positioned well.

Furthermore, Jhin’s Ultimate ability, Curtain Call, allows him to deal a lot of damage from a great distance. Weakened enemies will have to carefully dodge if they have any hope of getting out alive before they are killed by it.

The only downside to his Ult is that it does have a relatively long animation time, which means you are an easy target for assassins and other closing champions while using it. Be careful and only use it when you are in a safe position. 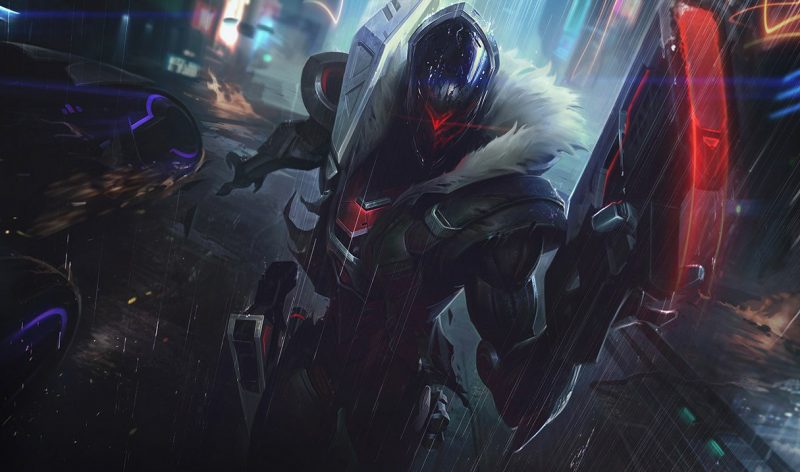 While Jhin does a great deal of damage in the late game, he is relatively weak in the early planning phases of the game. This is especially true while he reloads his gun and can’t strike back. Unless you have an obvious opening, you should farm from a safe position until you begin to stack large amounts of AD and crit chance.

Jhin’s reload timer also makes it hard for him to CS in lane efficiently. While farming, you should save your Q to help you, last-hit minions, while you are reloading your gun. In this way, you will rarely miss minion gold.

Don’t waste it trying to poke the enemy champions. It doesn’t deal enough damage in the early game to be worth the mana cost and missed gold.

How to Play Jhin ADC in Different Phases of the Game

Jhin will grow in power throughout the game, so your playstyle will need to evolve with his ability to deal damage.

Jhin in the Early, Laning Phases 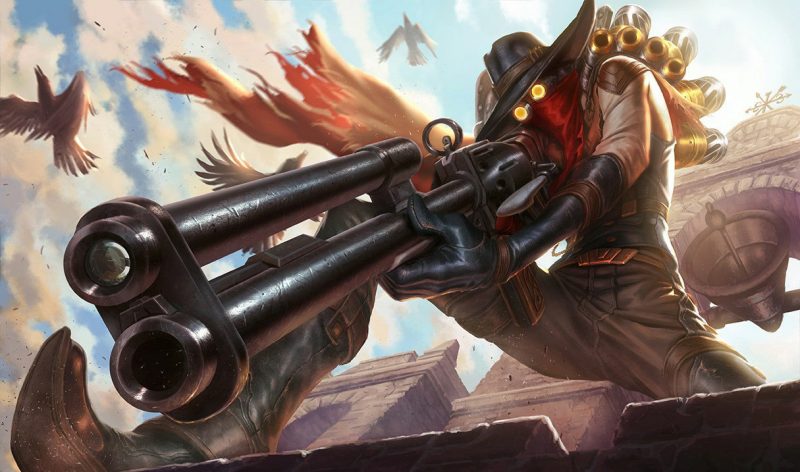 As a Jhin player in the laning phase, you should sit back and farm to scale into your late-game potential as quickly as possible. This means not picking unnecessary fights, not overextending, and not missing out on minion gold because you are too busy poking the enemy champs.

Stay in your lane as long as possible before backing to the fountain to get as much AD as possible on your first store trip.

The Mid-Game: Transforming into a Physical Damage Beast

Once the laning phase ends and towers begin coming down, you should begin to roam with your support more. You will begin dealing enough damage to be remarkable, but you will still be squishy enough that you shouldn’t roam solo.

Try to keep your farm up and continue scaling. If you can, participate in team kills as much as possible to earn that extra gold. When facing multiple enemies, use your lotus traps to reduce the chances of you getting flanked.
In the shop, prioritize items that give you AD, critical hit chance, or lethality.

In the late game, Jhin dominates. Your team’s win chances will typically jump up more than 3% if you can make it past 45 minutes with Jhin. Very few champions have the ability to counter his damage output.

In fact, some carries with full health can even be killed from just the last shot in his 4 shot sequence. You deal burst damage and still have to worry about your reload times, so don’t get into protracted fights in close quarters with tanks.

Should I add lifesteal to Jhin’s Build?

While lifesteal certainly won’t hurt Jhin, it shouldn’t be a primary focus. Because he has a long reload timer during which he isn’t dealing damage (and thus not stealing life), you can’t rely on lifesteal to keep you alive.

Focus on massive damage output to obliterate enemies instead of on sustaining yourself through long fights. If you don’t kill an enemy in a one-on-one engagement before you need to reload, your chances of surviving won’t be very good.

Lifesteal and omni-vamp are nice to haves that you can get from runes or items, but they should not be your primary focus when building Jhin.

Who does Jhin Synergize well with? 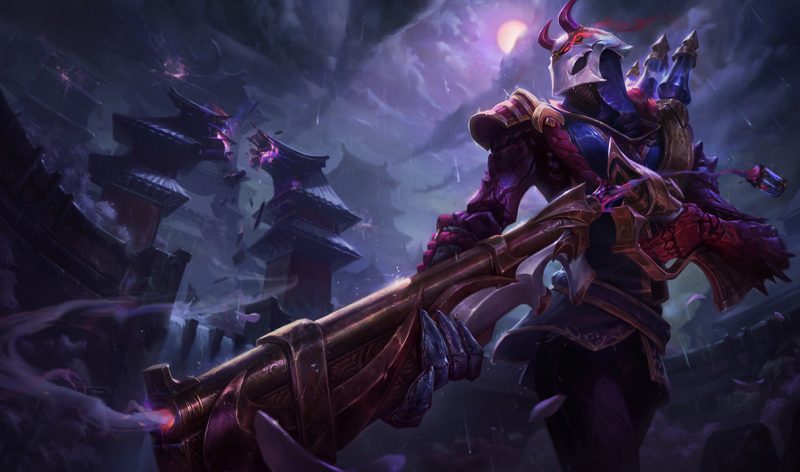 Jhin does very well with poking supports, such as Zyra and Brand. They can help keep the enemy laners off of Jhin while he focuses on earning kill gold. His win rate goes up by as much as 5% when paired with the proper support champs.

Jhin also synergizes very well with fighters, tanks, and CC-heavy champions that can help protect him during team fights. Jhin will often deal the majority of his entire team’s damage in the late game, so he will need to be properly protected if he is to make an impact. Prepare to be targeted and focused in team fights.

When Should you Not Pick Jhin?

Don’t pick him during Champ Select if the enemy team has already purchased a lot of brawlers or other champions with a strong ability to close on you quickly. You need to be able to live long enough in team fights to take out most of the enemy team.

Champions like Nocturne, Dr. Mundo, Leona, and Wukong all have too great of an ability to dive your backline to take you out quickly. Against these champions and champions like them, you should avoid taking Jhin into the Rift.

Stacking movement speed with Jhin will only get you so far. Champions like Nocturne can be on top of you in an instant no matter how fast you are.

Conversely, Jhin is an ideal choice if your team doesn’t have many gap closers or a lot of CC.

How Nutrition Can Help You Achieve Your Fitness Goals – 2022 Guide

Kim Kardashian and Alex Rodriguez Could Be The New Golden Couple