Hilaria Baldwin doesn’t know how to read the room. If she did, Hilaria would lay off a bit of the social media networks. She’s still present and posts almost every day amid the incident her husband had. If you have been sleeping under a rock, Alec Baldwin, her husband, shot and killed a person on the set of his movie Rust. This didn’t stop Hilaria from posting on social media platforms.

This time she could have gone overboard. When it comes to kids all of us need to be careful what we share with the public. This especially goes if you are a celebrity. And, you should be extra careful if your husband recently shot someone. Hilaria decided to brag that her son knows how to spell the f-word. Not only that, he even wrote it down on the dusty car. Alec Baldwin’s wife told us this through a string of Instagram stories. Their six-year-old son wrote: “F–k ya poop.” 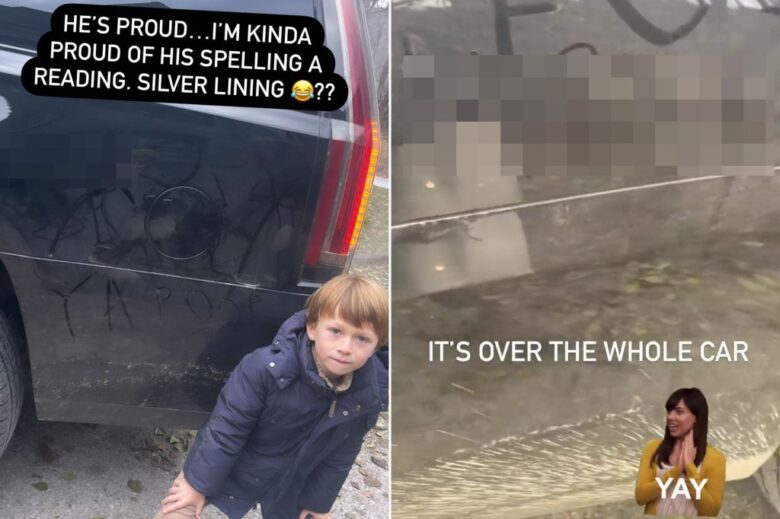 While Rafael is a kid and doesn’t know any better, his mother should know better. At this moment in time, she really should stop posting family photos of their happy life. She even found it appropriate to joke about it with a caption saying: He’s proud … I’m kinda proud of his spelling [and] reading. Silver lining??” Later she lowered the ball a bit, and shared a photo of two of them cuddling, with a caption: “Grateful that you can spell … Now we can work on some nicer words.”

Rafael is one of six children that this yoga instructor shares with the famous actor with others being Carmen, 8, and Lucia, 9 months, and sons Leonardo, 5, Romeo, 3, and Eduardo, 1. The little boy could be going down in the footsteps of his father who is also known for having a foul mouth. Back in 2014 when Baldwin got arrested for breaking traffic rules he said f-word yourself to the police officers on the spot multiple times. He also went on a rant saying: “Don’t you know my taxes pay your salary? Can’t you get that around your f–king head?” As if this isn’t enough, on one occasion he called his daughter Ireland a “thoughtless little pig.”

In addition to not being the nicest person, you already know he has various legal issues on his back right now. The Departed star is being sued for negligence due to the fatal shooting of cinematographer Halyna Hutchins in October. While this situation is being resolved, his wife already moved on with her life and is even sharing details on Instagram. We hope she can get a grasp on the situation, and ease a bit, at least up until all wounds of all families involved are healed. This is not much to ask for, but we’re afraid that she could already be infected with social media virus, and just can’t get off Instagram.