Home Celebrities Billy Porter Stuns Everyone With His Fashion Choices: Is He a Red-Carpet God(ess)?
CelebritiesStyle

Billy Porter is shocking and delighting people around the globe with his unusual fashion choices for months now. His glamorous outfits are talked about all world-wide, and this 50-year-old actor and singer gained the title of the Best dressed star on numerous red-carpet occasions.

The unofficial title of the best dressed at the 91st Oscar Award ceremony at the Dolby Theater in 2019 for the first time in history went to a man. 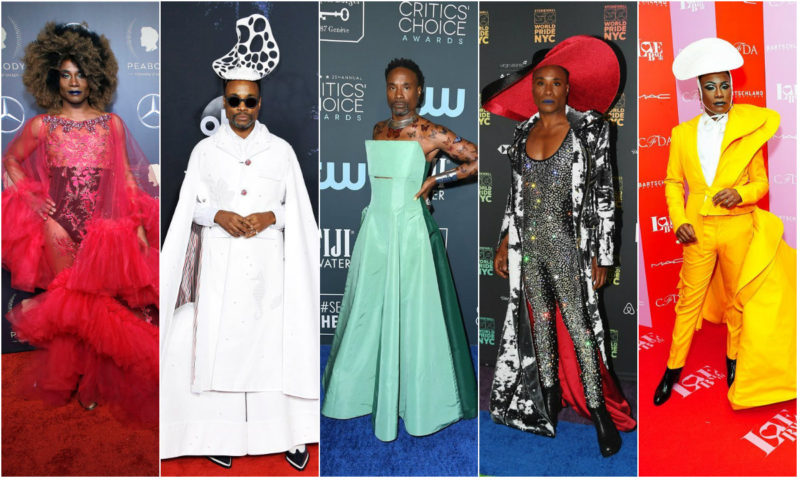 Ingenious Billy Porter appeared at the award in a hypnotic creation, a combination of a tuxedo and a lavish black plush gown. The dress that overshadows everyone else is signed by Christian Siriano. As the actor from the “Pose” and “American Horror Story” series and Tony Award-winner appeared among the first, he managed to make everyone talk only about him all night long. 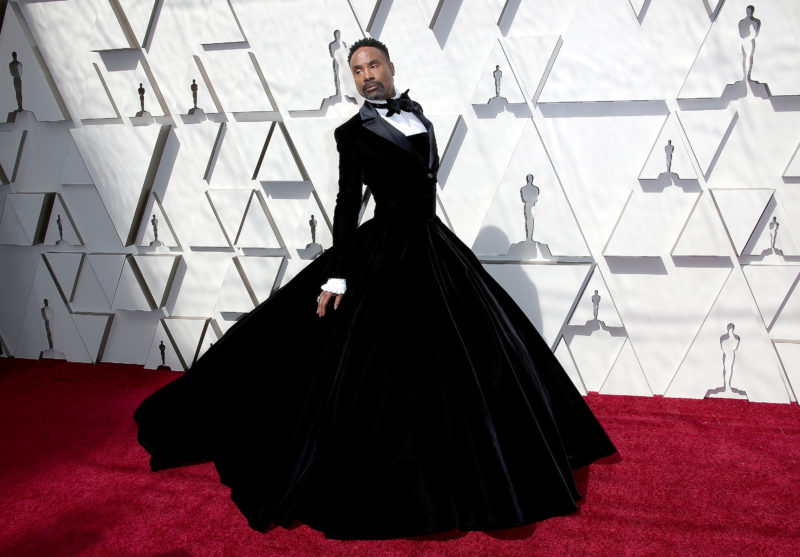 As reporters joked, Porter blew everything away because he looked like a dignified and mysterious Victorian lady and her butler at the same time.

Breaking down all the fashion and gender stereotypes that, unfortunately, continue to shape our beliefs and behavior in everyday life, Billy won this Academy Award with a slogan that made him famous for in his current series “Pose” – “Category is: Having a Wedding to Yourself and LOVING IT “.

Porter told Vogue that the first dress rehearsal made him feel “free and alive than ever,” as if radiating.

“This look was interesting because it’s not drag. I’m not a drag queen, I’m a man in a dress. My goal is to be a walking piece of political art every time I show up. To challenge expectations. What is masculinity? What does that mean? Women show up every day in pants, but the minute a man wears a dress, the seas part”, he said to Vogue. 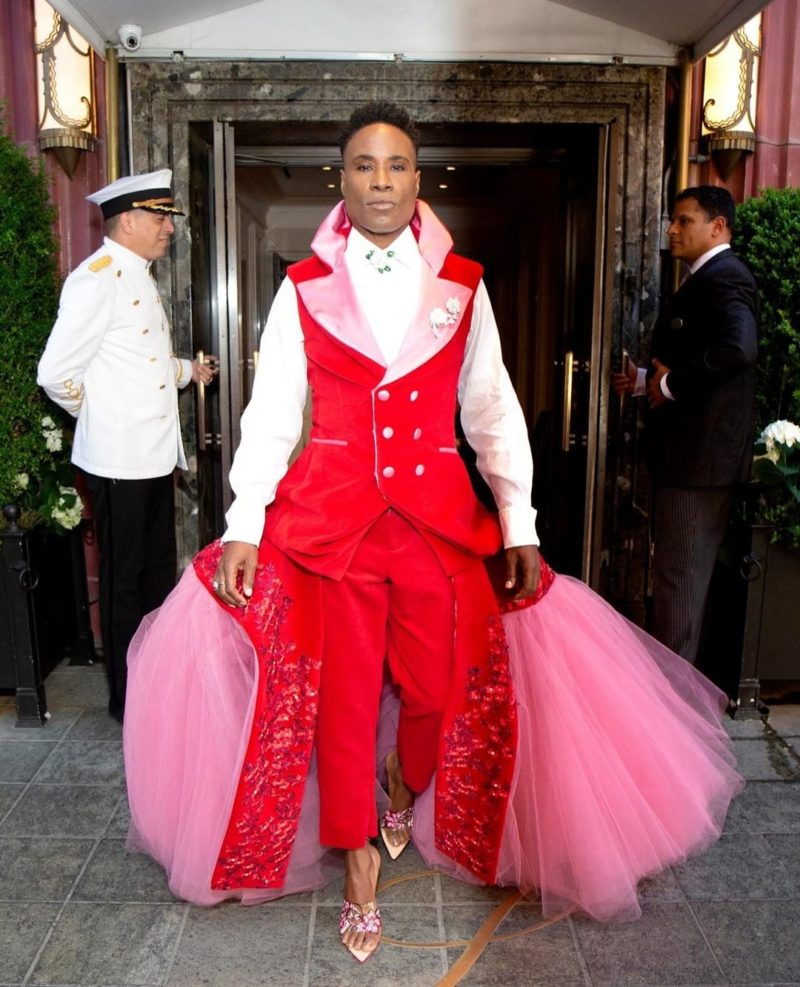 Billy Porter recently stated that he is not concerned by gender or “gay or straight” roles. “We’re seeing the change now. Look at me, I am the change. For 30 years, I have made it my life’s work to be this person standing right before you”, Porter told the PA news agency.

At the 77th Golden Globe Awards that was held at the Beverly Hilton Hotel in Los Angeles, Billy Porter was also the most talked-about actor. This unique creation is signed by designer Alex Vanassche, while the boots with the sparkling design were designed by Jimmy Chu, and as jewelry accessory, he selected pieces of the famous jewelry house “Tiffany & Co.” 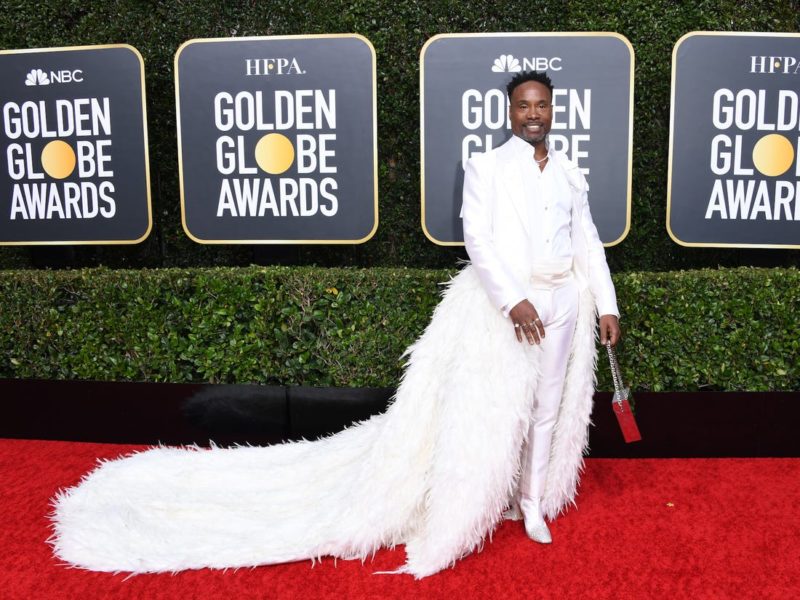 “The world has gone absolutely mad and when we started to think about what I would wear today, the first major appearance of the new decade, we decided to go all white. The color symbolizes peace, hope, and new beginnings”, he wrote on his Instagram.

The Category Is: BLAQUE SWAN ??? Wearing custom @alexvinash with custom @jimmychoo Boots and @emmkuony Bag using over 4,000 Swarovski Crystals. The jewels are by @tiffanyandco with styling by @sammyratelle . . It’s such an honor to return to this year’s 77th annual @goldenglobes in support of @poseonfx. A show that has completely changed my life and created visibility for our marginalized #lgbtq family. Our show is particularly important as currently our human rights are still under attack and our political world is in shambles. The world has gone absolutely mad and when we started to think about what I would wear today, the first major appearance of the new decade, we decided to go all white. The color symbolizes peace, hope, and new beginnings. My @tiffanyandco dragonfly brooch is symbolic of transformation and self-realization. All of these themes and symbols encapsulate my hope for all people in 2022. We must continue to strive for life and kindness. Especially when our world is on fire . . Style by @sammyratelle Grooming by @heyannabee Wearing custom @alexvinash Jewels by @tiffanyandco Boots by @jimmychoo | @sandrachoiofficial Clutch by @emmkuony Eyewear by @mercuranyc Crystals @swarovskiforprofessionals ? by @gettyentertainment

Yesterday in Los Angeles at the 25th Annual Critics’ Choice Award, Billy Porter shone again. This time in a two-tone green dress that revealed his butterfly tattoos. The “Pose” star wore Hogan McLaughlin jumpsuit with hand-painted butterflies across his chest and arms. 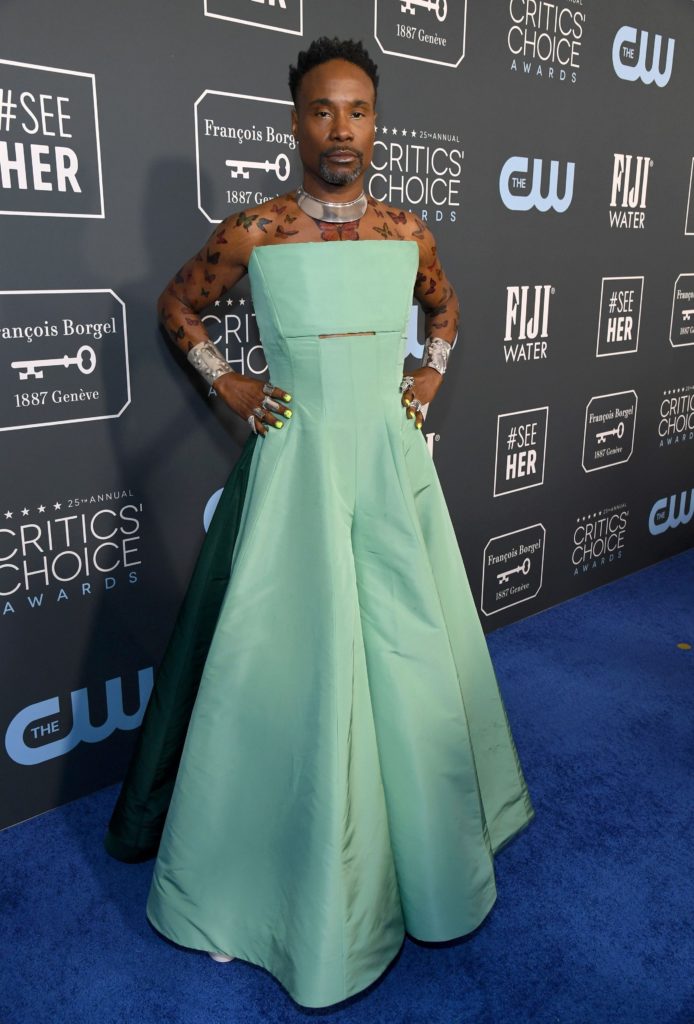 He posted a story on his Instagram greeting his fans from the car on his way to the ceremony.

The countdown is on CHILDREN! Listen Up! ⁣⠀ Love Ball III, the return of the legendary HIV/AIDS benefit, is coming at you on June 25 at Gotham Hall hosted by the @CFDA and @BARTSCHLAND with yours truly as the EMCEE of the evening. Are you ready? Start getting your looks togetha, cause this runway is going to be on FIRE. Link in bio for tickets #LoveBall Photo by @santiagraphy | set by @taylorhornestudio ⁣⠀ ⁣⠀ Style by @sammyratelle for @rrrcreative ⁣⠀ Styling Associate @ashleymarienyc ⁣⠀ Jacket @nosessola ⁣⠀ Shirt & Dress @xllullan ⁣⠀ Shoes @giuseppezanotti ⁣⠀ Eyewear @native_ken ⁣⠀ ⁣⠀

Porter made quite an entrance at the 2019 Met Gala. He has been carried in by a team of six bare-chested attendants, while he wore a golden costume with a hairpiece, reminiscent at a pharaoh. His costume was accompanied by a pair of golden wings. 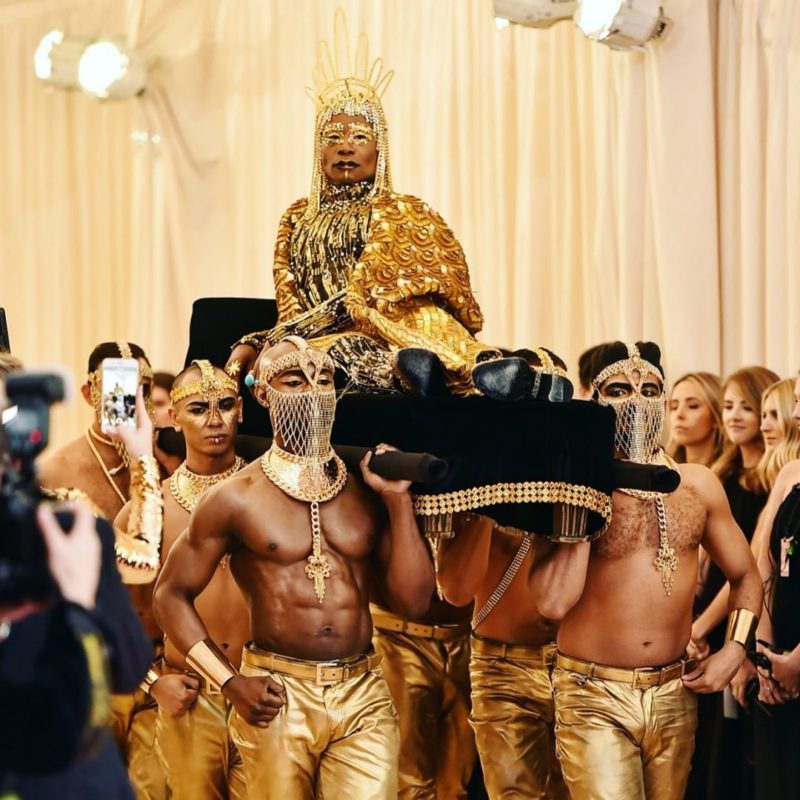 He shared his gratitude for making this appearance possible on Instagram. “Thank you to all who have taken the past six weeks to make this happen”, Porter wrote.

Thank you to all who have taken the past six weeks to make this happen. Thank you to my Creative Director & Stylist @sammyratelle of @rrrcreative for your ability to dream big and for being by my side as we explore this new world. I am living my wildest high fashion dreams. @theblondsny @phillipeblond & @davidblond. There is no one like you. Thank you. For being kind. And fabulous. And glamorous. And snatched!!! I truly felt like a kween today. I will never forget it. @lasonyagunter, you beat this face for the gawds today gurl. Thank you for being my woman. @patmcgrathreal – I cant express enough gratitude for sponsoring our make up today. Mr. @giuseppezanotti – the fact that you created these shoes for me just for this night, is a dream come true. @nicolasputvinski thank you for allowing me to travel in style and designing the killer lewks for my escorts and palanquin. And to my sexy men, thank you for holding papa up . . Creative Director & Stylist for all @sammyratelle for @rrrcreative Agency Styling Assistant: @ashleymarienyc Production Assistant: @estershamailova Custom Look: @theblondsny Custom Shoes: @giuseppezanotti Fine Jewelry: @oscarheyman @andreolifinejewelry @johnhardyjewelry @mordekaiofficial Billy Porter's Make-Up: @lasonyagunter Make-Up Assistant: @mikeyclifton Make-Up provided by: @patmcgrathreal Egyptian Litter & Carrier Designs by: @nicolasputvinski Carriers Make-Up: @facebygoran & @ashleyvictoriamua Mr. Porter's Carriers: @julius_anthony @taureanje @kellenstancil @thejoshdrake @lap_nyc @doniejunior

For the 2019 Peabody Awards, the 50-year-old choose a Sergio Guadarrama’s creation – the pink-red gown, which featured mounds of tulle. This dress had an eco-conscious message, as it was made of up-cycled materials. 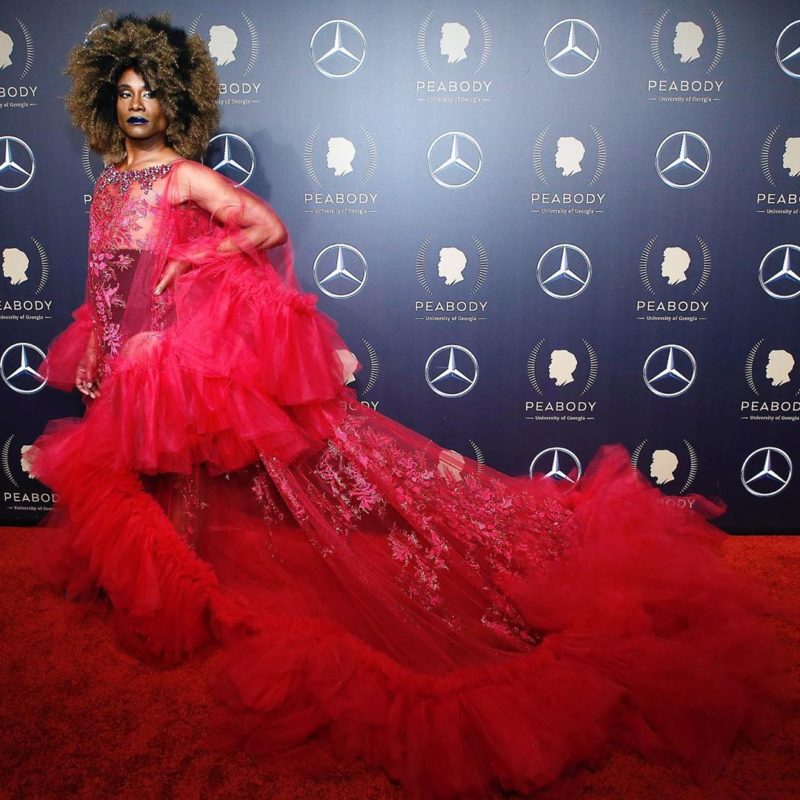 In June 2019, Porter posted on Instagram: “I attended the Tony Awards this past Sunday to present the ‘Tony Award for Excellence in Theatre Education’ in affiliation with Carnegie Mellon University to Madeline Michel, Theater Director at Monticello High School in Charlottesville, Va. In Ms. Michel’s inclusive drama program, students from all walks of life are free to express themselves on stage.”

He wore a combination of red velvet and pink tulle, and it was also made of repurposed material.