Mike Holmes stumbled in front of the camera 20 years ago by sheer accident. The small-time contractor soon became one of the most beloved TV personalities. Hard-working Mike enchanted the audience with his blunt, straightforward approach to the DIY homeowners facing the disastrous consequences of the lousy repairs. His famous rants about botched jobs were refreshing among the home-building shows that glued the viewers to the screen. Privately, Mike stayed humble and honest, still living in a modest home in Georgetown, Ontario.

Mike Holmes before the TV breakthrough

From an early age, Mike helped out his father with electrical installations and the general work in and around the house. Holmes grew up with the toolbelt around his waist which became the inseparable part of his image. By the age of 19, Mike was doing home repairs leading the crew of 20 men of different trades. In 2000, Mike got hired to do some work for a Canadian TV home improvement station where the ever-opinionated Mike got spotted by the producers. The ball started rolling from there pretty quickly and in a couple of years, Mike gathered over 250,000 viewers every week.

With “Holmes on Homes” exceeding the expectations of the production, US HGTV picked up a scent of possibly generating even bigger profits on the US market. On the other hand, Mike had his own ambitions about expanding his company. After the private talks with TV executive Mike Quast and Pete Kettlewell, the agreement was made to split the company in two – one part, managed by Quast will be devoted to educating owners on how to hire professional contractors and avoid lousy jobs, and the second, led by Kettlewell is going to be dedicated to expanding the popularity of the TV show.

In 2006, Mike got an unexpected offer from Nestle to do a commercial on Nescafe. Nestle of Canada was launching the campaign for instant coffee, and knowing that Mike Holmes, who was by now a well-known TV celebrity, was drinking exactly that kind for years proposed to him a business deal to promote the drink. Mike accepted and his fame shot through the roof along with his income.

By 2009 Mike Holmes was on top of the world. His brand Holmes Group was now covering the home inspections all over Canada, promoting environmentally friendly home building, and launching his line of workwear. However, the promotion of working clothes did not go so well in the beginning, according to Holmes, the perfectionist. The production company labeled it as “a premium version of the existing line,” as opposed to its own standalone brand. It took a while, but the things got sorted out and now Mike’s workwear can be found in the biggest retailers like Home Depot and Amazon. In the wake of Hurricane Katrina, Hollywood jumped in to give a helping hand to the victims. Brad Pitt was one of the first ones to do something concrete about the misery caused by the floods by making a Make It Right Foundation. Mike already held a trademark on the famous motto, and instead of taking Pitt to court, they joined forces – Pitt with the founding, and Mike with his expertise. Win-win.

Net-zero homes are currently a huge thing among homeowners. What it means is building self-sustainable homes, that will have natural sources of energy, and even produce more than needed. Mike took this to another level by working on homes that won’t burn, won’t mold, and are termite-resistant. “It’s an investment that will pay you back every month for as long as you live in it. It really is the future of housing”. In 2015, “Holmes Manual” came out and was described as a “must-have guide for homeowners” that answers their “most common questions”. Mike talked about being stopped everywhere, in the grocery store, gas station, by people asking him about home repairs. So, publishing a book that answers the most common questions made perfect sense. The book is selling well, adding huge funds to Mike’s bank account.

Mike has three children with his ex-wife Alexandra Lorex: Sherry, Amanda, and Mike Jr. The latter two joined their father on the TV screen to build the Holmes Group and further promote his TV shows. Mike Jr. had his debut with building a garage/man cave for his father on one of the episodes. 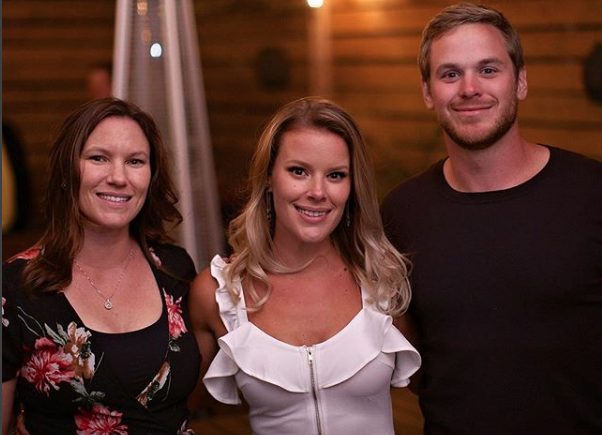 Mike Holmes has been dating his girlfriend Anna Zappia for the last 20 years, so naturally, he refers to her as his wife.

Holmes is currently residing in Georgetown, Ontario home. It was originally the fixer-upper sitting on a beautiful plot of land. Being a homebuilder it was an irresistible challenge for Mike to remodel the old, 70s home and turn it into outdoor heaven. Contrary to popular belief, Mike is not living in the mansion, but rather in a modest 2,000 square feet home. Very little information is available about his personal residence, except a few short videos showing Mike’s work around the residence.

Thousand Islands’ home is not Mike’s primary address but he kept it as an income property. The home is split into two separate units. The first floor is Mike’s little craftsmanship kingdom, with a huge garage loaded with every tool one can imagine. The top floor has 2 bedrooms and 2 baths, with gorgeous views from the second-floor balcony of St Lawrence River. The colors of the interior are mostly neutral with a splash of navy blue to complement the environment. With Mike’s current net worth of around $30 million, we must say that he’s a very down-to-earth guy. With most of his family now involved with his home building enterprise, chances are that the Holmes family will only continue to grow.