After a long hiatus, one of the WWE headliners is back at it. Strowman is back on the menu, and he’s ready to start his story all over again with the company. The first man he crossed across is Damian Priest who won the United States title at SummerSlam. He could celebrate the title for too long, as a dangerous challenger is now on his path.

Braun was out of the WWE, but he wasn’t sitting around doing anything. The Monster Among Men is in the best way of his life, and he kept a close eye on what transpired at SummerSlam. The belt that belongs to the United States champion is now in the hands of Damian Priest who beat Sheamus to it. Strowman was aware of the match and shared his thoughts and a challenge on an Instagram story. 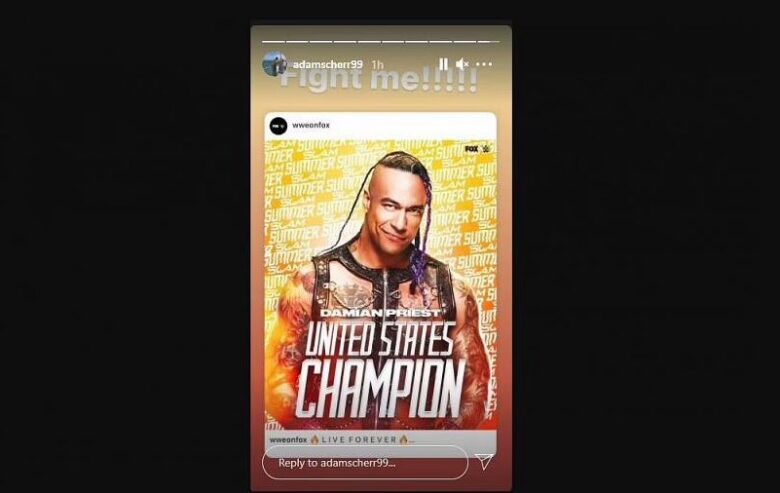 The two fighters never went head-to-head before, and Strowman obviously believes this is the right time. As you can see in the Insta-story the message is as simple as one can get: FIGHT ME! Strowman isn’t the one to talk lengthy and he proved it once again. With this message, it would seem that one of the biggest names in the WWE is ready to come back to the company. He was released a few months ago together with the likes of Aleister Black, Lana, Murphy, Ruby Riott, and Santana Garrett.

The release of this man came as a surprise to many, as he was one of the premium wrestlers and the biggest draw the company had in recent times. If you remember he was the Universal Champion, with a couple of storylines in work. He was supposed to reign for a while but nothing came out of it. He was released in the news that shocked even those close to the top brass of the company. It was a massive surprise especially after he took the belt from the WWE Hall of Famer Goldberg.

WWE has come to terms on the releases of Braun Strowman, Aleister Black, Lana, Murphy, Ruby Riott and Santana Garrett.

WWE wishes them the best in all of their future endeavors. https://t.co/8bAQIFgA1M pic.twitter.com/b77AeeLuDn

In one of the statements Strowman gave after winning the belt is sounded like he knew what was brewing. This is what Braun said: “You never know what’s going to happen in WWE. That’s one of my favorite things about the job that keeps you on your toes. Opportunity blew the door off the hinges for me at that moment.”

As you can see, he was aware that the opportunity in the WWE doesn’t have to last forever. Furthermore, he was also sentient to the damage the company received from the ongoing pandemic. While reflecting on the work put in during the pandemic, he added: “It was a little more difficult than I think in normal times; [having] no crowd and being under the microscope without being able to hide behind the cheers or the boos and the animation of the audience, I feel like we all had to step our level of performance up. I put my head down and went to work.”

As we said, Braun was away from the company but he didn’t sit still. He was working his ass off and is more than ready to step back in the ring. His physique is nothing like it was before, as he’s now slimmer, and is a new beast completely. Rumors are that he’s heading back to the WWE, but nothing was announced yet. With his latest Instagram challenge, he is looking to bring attention to his case. After two months of being out of the action, Strowman is going to be a massive challenge to anyone. If he’s heading back, Damian Priest better is ready.