2021 Ferrari SF90 Stradale – What Is Known About The New Mid-Engine Ferrari V-6 Hybrid?

First announced at the 2019 Geneva Motor Show, the new beast from the Italian manufacturer will be the Ferrari V-6 hybrid, set for an official introduction this summer. Many expect it to be in the mid-engine form, as this hybridized V-6 propulsion car will probably right below the F8 Tributo. It will ride on a modular platform that will yield at least one more supercar in the near future which might be a V-8 hybrid system.

The chief technical officer of Ferrari, Michael Leiters, presented the product strategy of the company back in September of 2018, and announced a whole new Ferrari V-6 family. He revealed the following:
“We will develop a totally new V6 family based on a very, very particular, innovative architecture with plenty of innovations regarding technologies and components.” 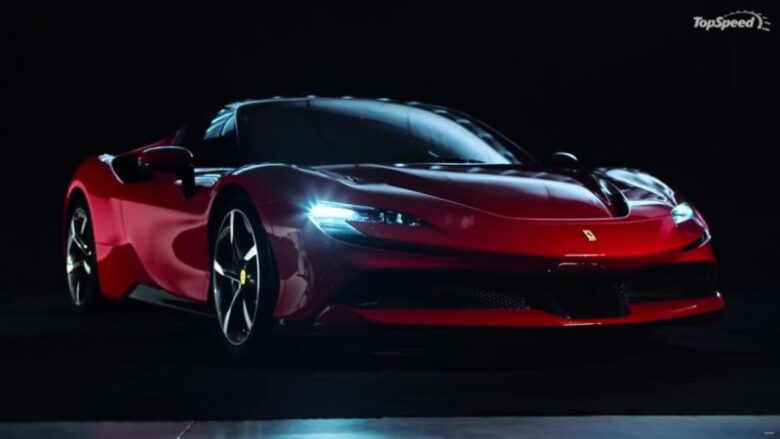 Luckily for the fans, there have been some attempts to spy on the Ferrari V-6 hybrid in its prototype form in Sweden and Germany. The photographers heard the sounds of a V-6, while the videos filmed in Maranello sometime prior to this apparently show the hybrid running only on electric power. This might be just the prototype, as there is not much chance that the Ferrari V-6 mid-engine supercar will only have the electric drive mode. However, the head of Ferrari marketing Enrico Galleria reported that the hybrid GT cars from the company will probably have Plug-In hybrid technology.

It has not been that long since the last peek at Ferrari’s new Hybrid prototype. Form the looks of it however, Ferrari is really trying to hide something, as the body has was covered by a thick tarp and padding. Still, it looks to be a regular 488 GTB body under this, but some drastic changes might be there now that Ferrari covered everything up. 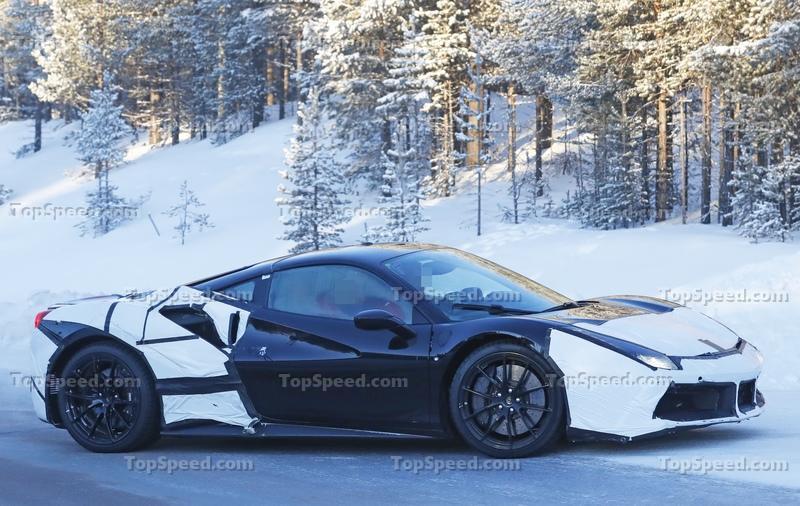 One thing clearly different is the headlight design, as they have the same shape but a different LED design is present. The rear air intakes might also might be a bit larger as well. When it comes to the rear end, Ferrari really wanted to hide something big. This might be a much more pronounced and natural spoiler that covers the taillights. In addition, the rear diffuser might feature larger openings, too. All of the padding might trick us however, as nothing is familiar at this point. At least we know a Ferrari Hybrid is coming based on the 488. 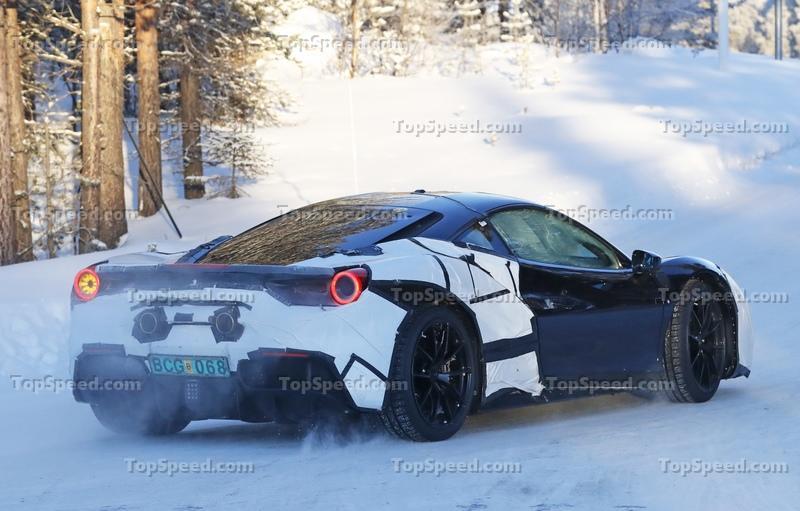 Because the only thing seen is the 488 GTB body covered with camouflage, not a lot is known. There are however some yellow stickers on the prototype, and they have some meaning. They actually designate that the car is a hybrid. They are there because if an accident happens, the rescuers will know it is a hybrid.

Interestingly, the car will be a halo supercar for the brand, with a lot of power and the engine technology taken from the superb Ferrari Formula 1 cars. The only V-6 hybrid system Ferrari makes is actually the one Formula 1 SF70H car uses. This tells us something, like the fact that the new V-6 engine and hybrid propulsion system sit a lower when compared to the V-8 engine in the 488 GTB. 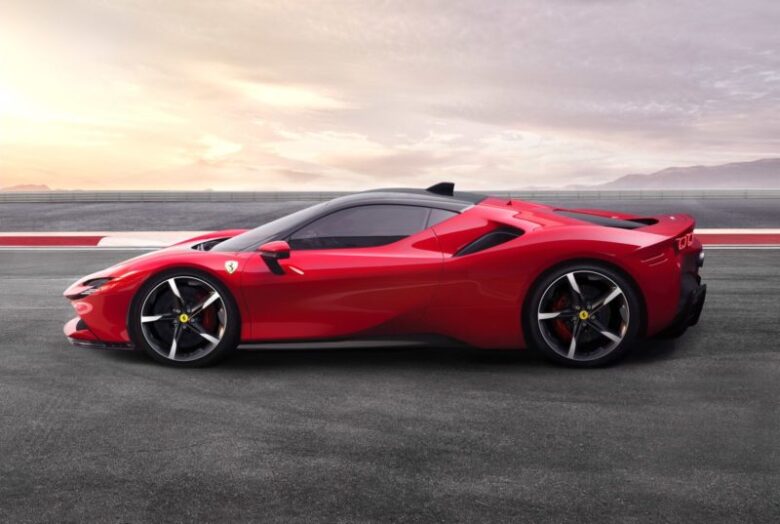 It was previously revealed that the new Ferrari mid-engine supercar will have active aerodynamics.
The LaFerrari is the last hybrid by the Italians, and the new car will not be that exclusive. It will probably be quicker and faster, and compete with the new Lambo and Aston Martin mid-engine supercars, maybe even Porsche. The mid-engine Aston Martin Vanquish a proposed Lamborghini LB48H Hybrid Supercar are the two in question. 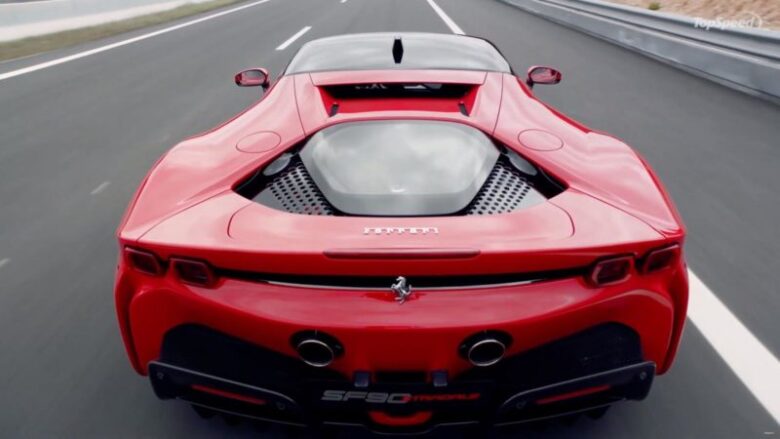 The interior will remain a complete mystery until the unveiling of the car.
The F8 Tributo interior is heavily influenced by the 488 and the 458, and does not seem very unique or special. Ferrari took parts from their 812 Superfast cabin and fitted them to the F8 Tributo, which can be with the dials, air-con controls, vents, central stalk with modes, instrument cluster, and radio controls. All of this is the same as in the 812 Superfast. 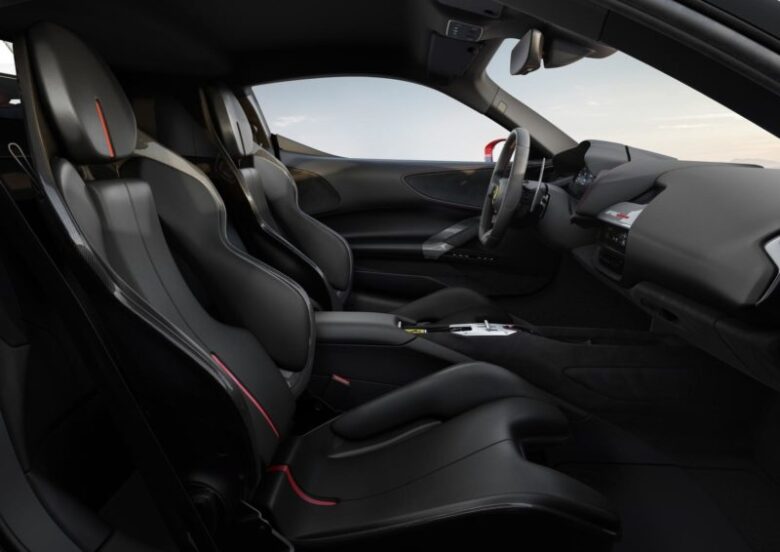 Considering these same pieces inside an entry-level Portofino and other Ferrari products, the interior layout of the Ferrari V-6 hybrid might take a swift turn. A display in front of the passenger should be expected, as well as round vents and a centrally positioned rev counter behind the steering wheel. Everything else will probably be new and different. Lastly, naked carbon surfaces inside could very well be a thing.

The new 2022 Ferrari SF90 Stradale will be on top of the future hybrid food chain, at least until an eventual V-8 hybrid appears. The V-6 engine might sport a higher specific output than the current lineup. Additionally, the electric motor provides assistance, and rumors suggest the new platform allows integration of a second electric motor on the front axle. Keep in mind that this car will be a RWD only supercar. The technical chief of Ferrari, Michael Leiters had this to say:

“If you want to maximize the benefits of electrified powertrain, you need to do it with downsizing otherwise it doesn’t make sense. A naturally aspirated V12 engine is not a downsized engine, and for me, it doesn’t make sense as a hybrid. We will fight for the V12, of course. We will do everything we can to keep it as it is core to our brand. But a real hybridization of the V12? I don’t see it. The LaFerrari was hybridization for performance. In the future, we’re being forced to look at emissions [the F8 is the first Ferrari to go through the WLTP cycle] and if you want to really utilize the CO2 benefit, you have to downsize.” 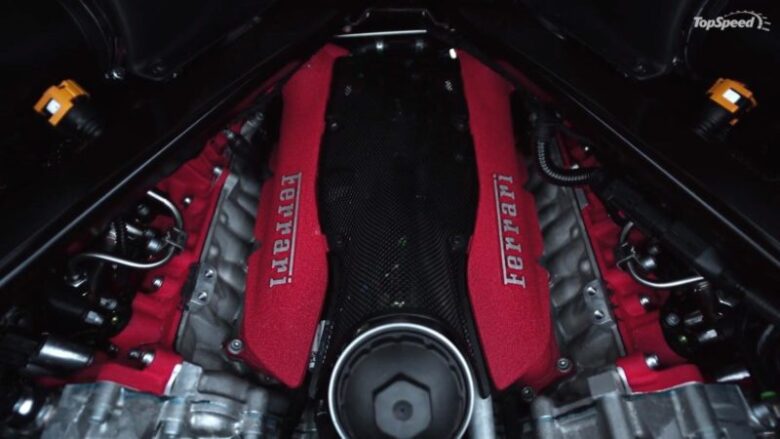 The propulsion system have brand new surroundings, meaning no carbon tubs nor exotic designs. It will only have a frame structure of different materials, some of them carbon reinforced polymers.
This might be too energetic, but Ferrari wants to build at least two cars on the platform, and it is basically a modular design that could support different powertrain options, and give designers freedom to stretch the wheelbase.

This decision to make the structure from different materials is great. They used aluminum, magnesium, and carbon fiber, meaning Ferrari engineers managed to lower the weight, which in turn offsets the weight of the hybrid system. The car will not have a KERS-like system like the LaFerrari, but a true hybrid system which is heavier. This helps with both the emissions and consumption. The new business plan of the manufacturer includes the growth and increase of the yearly production to more than 10,000 units. Because of this, the company falls under set of strict emission rules like other manufacturers. 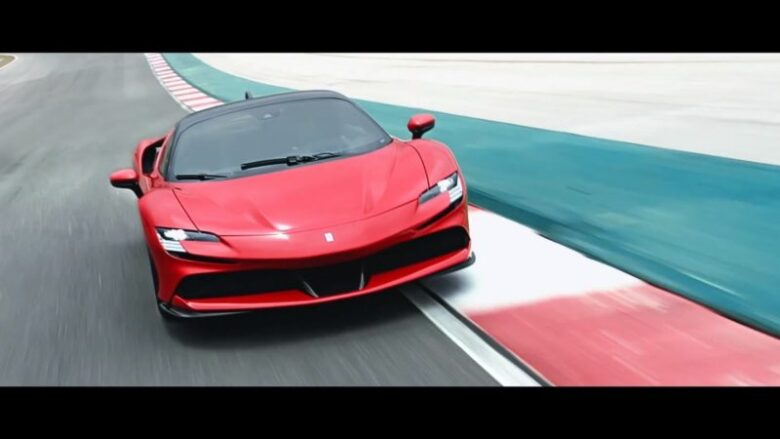 Mike Flewitt from McLaren supports this. When asked about McLaren hybrid supercars, he said:
“We’ve got to be honest: we’ve been driven to this (hybrids) by emission regulations.” He added that his company cannot offset the weight of the hybrid system by reducing other components.
The new V-6 will probably have an engine close to the 2.9-liter, six-cylinder from the Giulia Quadrifoglio. A whole different design is also an option, and whatever the result, this engine will work with the new double clutch transmission and sit at the all-time low.
The estimated combined output of the car is 723 horsepower and 800 pound-feet of torque. This is more than the F8 Tributo. 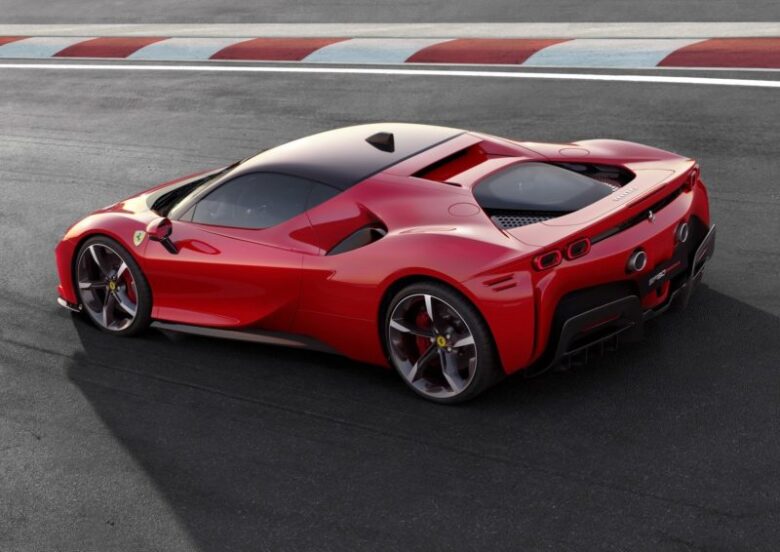 The new Ferrari V6-Hybrid will exist in the hierarchy between the entry-level supercars. As it will most certainly be one of the best and the quickest among them and therefore showing the Lambo Huracan, 600LT, and the R8 how to do it, the mid-engine Ferrari V-6 Hybrid could cost north of $250,000 and even touch the $300,000+ mark with all the optional packages and equipment.

Aston Martin Vanquish Vision Concept showed everyone the ability of the iconic car company to think in proper mid-engine terms. Although this car is still only concept, it will probably appear in 2022 with a twin-turbocharged V-6 engine. The Brits did not reveal much about the hybridization of this intriguing model, but even the V-6 can be a powerful and worthy opponent to anything Italian. Remember that the six-cylinder in the Ford GT has an astonishing 650 horsepower. So you see, the upcoming Vanquish Vision will be a perfect competitor to the upcoming Ferrari V-6 Hybrid supercar. 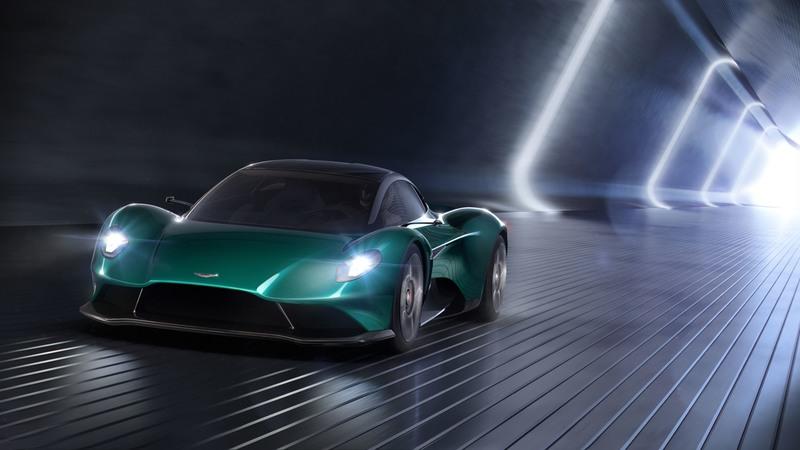 Porsche has not yet confirmed nor denied a potential development of a new mid-engine supercar to compete with the McLaren 720S and the F8 Tributo. However, rumors from way back in 2011 suggest their mid-engine supercar could be called 960. If it ever sees the light of day, the Porsche 960 will have a hybrid engine with more than 700 horsepower. 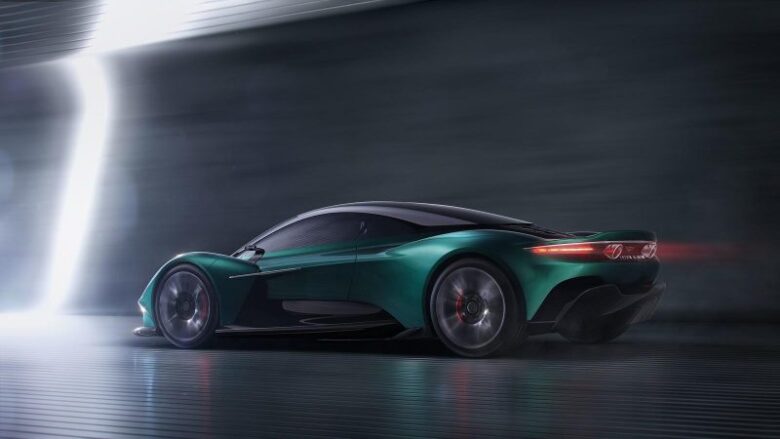 We will lastly include the Huracan Evo because it seems its successor will compete with the new 723 horsepower Ferrari. The Huracan Evo and especially its Huracan Performance more powerful brother are more than ready and capable to take on anything from Ferrari. Remember that the Huracan Perofmante is a car that lapped the legendary Nürburgring track in 6 minutes and 52 seconds. In comparison, although unofficially, the 488 GTB did it in 7 minutes and 22 seconds.

A major Ferrari revolution is on the horizon, as the Ferrari F8 Tributo looks to be the last word of Ferrari mid-engine supercars powered only by ICE. The successor will have a V-8 hybrid system, while the mid-engine Ferrari V-6 Hybrid is a completely new car. To finish this off, it will probably be called the 486, which sounds great if you ask us.

Kinetic Sand – How is it Made?