Margot Robbie has been an A-lister for a while now. With many leading roles in Hollywood blockbusters, she amassed quite a fortune. Like many of her peers, she decided to stash some of her cash in real estate. Her collection of mansions spreads across a couple of continents. In this domain, she literally stands above the crowd. You already know that she can afford a couple of mansions considering her roles in films such as Suicide Squad where she plays Harley Queen, and her standalone movie in the same role. Of course, playing alongside Leonardo Di Caprio in the Wolf of Wall Street didn’t do any harm. At the moment she is one of the best-paid actresses in the world, so it is interesting to see where does she spends her money. It would seem she learned how to hustle in the real estate world after playing next to Will Smith in Focus. Let us take a look at what she has to offer in the property domain. It’s quite something.

You won’t find too many Hollywood stars not having a home in California. Of course, Margot Robbie doesn’t want to stand out, so she has one. Her preferred locations are Venice and Los Angeles. One of the first purchases in this region was her $2.73 million mansions at Hancock Park. She resides here since 2017 and it is quite a comfy place that offers five bedrooms a little more (5.5) bathrooms, and the whole place lies on the space of 3.3000 square feet. It is no wonder that the actress and her husband Tom Ackerley were attracted to this property. 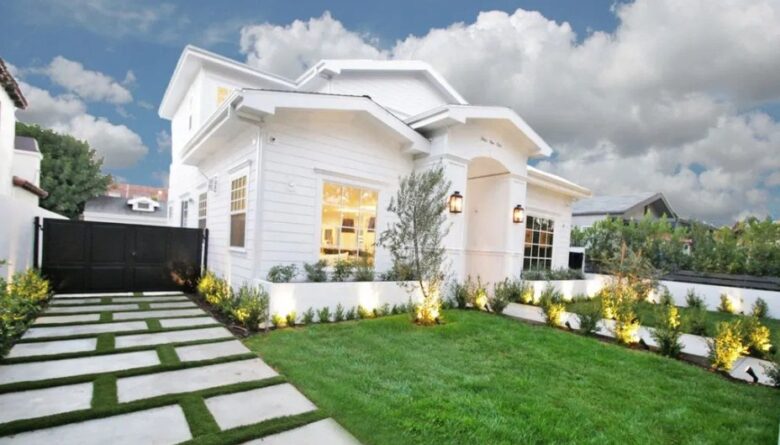 This place is almost new as it was built less than five years ago. It doesn’t have much land tied to it, but 0.15 acres seems to be enough for Robbie. The true value of this place lies inside where you’ll encounter a marble center island, a Carrera one at that. The windows are ceiling-high and they allow plenty of light inside which bodes perfectly with the blue paint used on the main dining room. Every piece of interior is hand-made and it’s easy to fall in love with floors made out of European oak, various chrome details, and paneled walls. 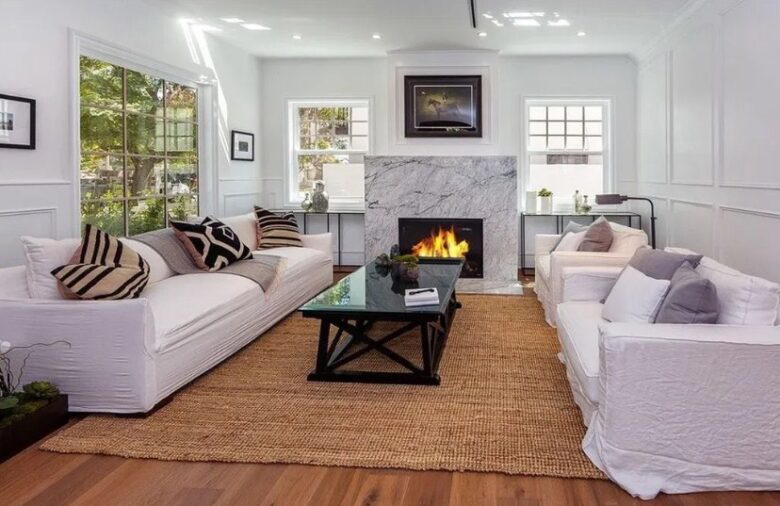 We had a first chance to take a peek at this place when the Focus actress presented it while featuring in Vogue’s 73 Questions. It was hard to keep attention on the question while all around the actress you could enjoy the house that among other things features the main suite that connects with balcony and offers a staggering ocean view. Like most houses in this region, it comes with a pool and a wine cellar. The fun fact is that she also has a secluded space for her pets, where you can enter from a secluded door. When you approach it from the front it has that charm of beach houses, while at the back it is equipped with a beautiful garden. But, she’s not satisfied by the house only appearing to be a beach one, she also went a step further and got herself one at the beach.

As we said, she has a couple of properties to boast about. This one is a rather impressive beach house located in Venice priced at $5 million t the moment of purchase. She bought this one in May of 2019. As you can see her portfolio started expanding in the last few years. Margot was quite secretive when it comes to this one, so little details about the transaction are known, including the size of the mansion and the whole property. The known information includes that it has three separate entities that create one property, which is protected by a high-tech security system. 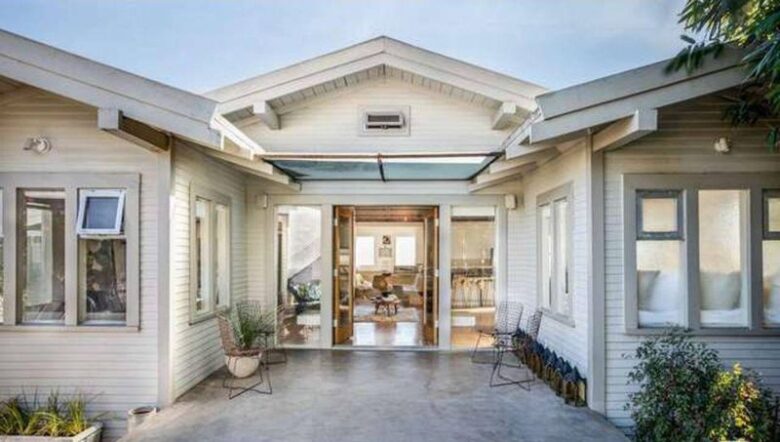 As we said, there’s not too much to tell due to a shortage of information, but here’s what we know. It offers garage space for up to three cars, with a loft lactated above the garage. This is one entity that we mentioned. The second one comes with three bedrooms, two baths, all of which have been recently renovated. The third entity is a sort of cottage for which we currently do not have a purpose listed. The main part of the property comes with an open main suite, that has hardwood floors, a fancy kitchen, and high ceiling windows that bless this space with a lot of light. 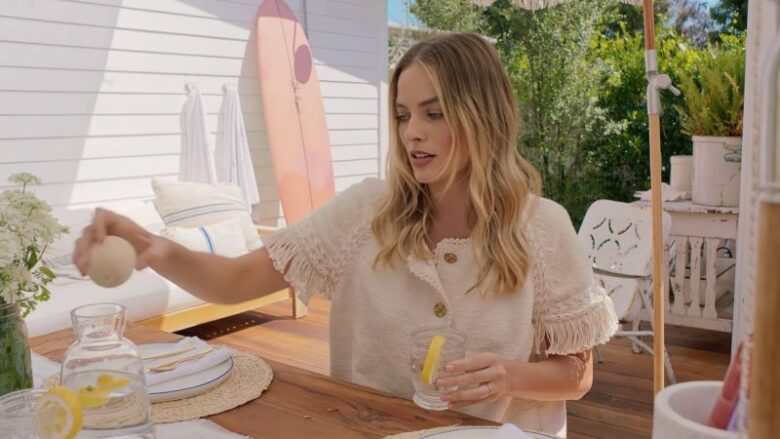 If you didn’t know this tidbit, Margot is of Australian origin, so it figures she owns at least one property in the land down under. This one was also purchased lately, in 2018. In cooperation with her better half. This Byron Bay property is worth around $3.9 million. It offers enough space for the couple, as it consists of three bedrooms, a timber deck, with a lot of wooden walls. It is located nearby to an ocean, and it is secluded by a lot of greenery. It offers plenty of privacy and it is built with uniqueness in mind. For all of you that love outdoor activities this would be an ideal place to live. Back inside it offers a massive kitchen, so making a meal shouldn’t be an issue for Margot. The standout part of this place is a massive pool, laced in the back which stands out compared to the bungalow-style house to which it is attached. 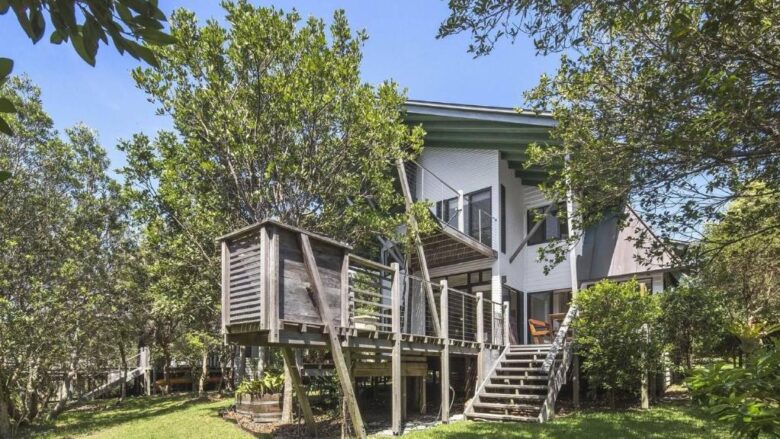 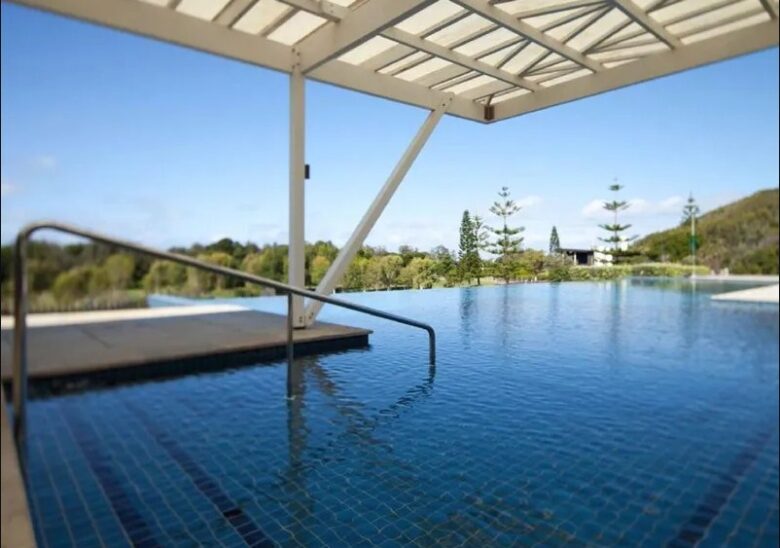 Gold Coast home is also located in Australia, and while it was purchased by Margot, it is not entirely bought for her. This is a home that she bought for her family. Her mom and sister currently enjoy this Queensland’s Gold Coast mansion worth $1.8 million. This one with three bathrooms, two bedrooms, and a garage place was acquired by the actress in 2019. It holds a perfect distance from Robbie’s Byron Bay which means that when in Australia she stays close to her family. It is nice when you want to remain close to your family members, and can afford a place like this one. Two places to be precise. The best part is that when her mother and sister come to the US they also have plenty of space in each of her new houses. 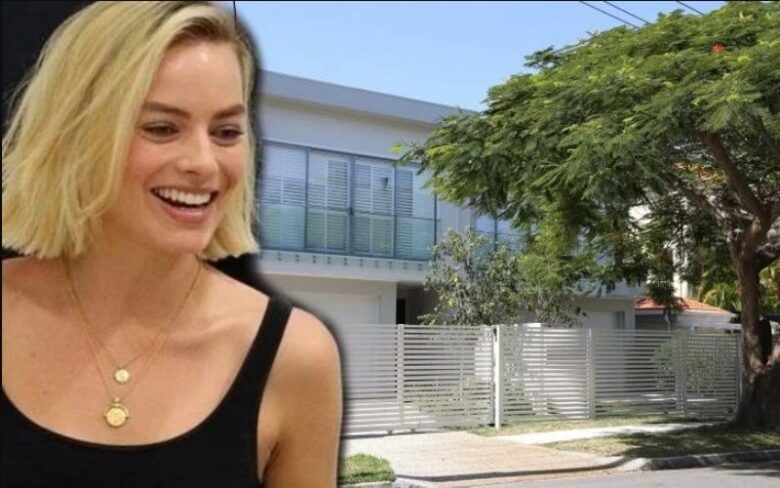