Divina Almeraz Casas, 22, is Playboy Mexico’s September 2019 Cover Girl. Divina has been with Playboy Mexico for three years. She first was introduced to the family by being featured in the November 2017 Hugh Hefner Edition. She became an instant fan favorite with her bubbly personality and her beautiful body.

Her body became a fan favorite, along with her stunning smile and capability to interact with the fans on a personal level. She later became July’s Playmate in 2018 and grabbed her first centerfold in the famous magazine. Divina has made multiple appearances on the web with her stunning pictorials and featured videos.

Second version of the cover for @playboymx September 🌹 Loved this sultry Spanish feel..

The following year, Divina maintained strong relations and popularity with the Mexican fans that she became the cover girl for the “Special Edition” sponsored by Lerk. Divina is known for her vibrant personality and professionalism in the fine art industry that she was bound to be chosen for the special edition. She toured in Mexico City for public appearances and radio talk shows with celebrities like Harold Huerta and There Soto.

Her visits to Mexico City have been conjugate for her work and request by the fans and media of the state. Her cover was a big break in her career. It was everything that she aspired for. “When I first began modeling, I didn’t think I would end up becoming a Playmate, I always dreamed of the moment and posing nude for this amazing magazine, but at such a young age? I feel like I can accomplish anything I want.”

Divina began modeling at the age of 19 while living in Newport Beach, CA. Her callbacks to Los Angeles were often and tedious, but she still lived in Orange County amidst her fame from Los Angeles to Mexico City. When she began working for Guess in 2018, she would drive 3 hours in total to get into Downtown Los Angeles, but all because she loved what she did, modeling. Divina has loved being a fine art model with a passion. She chooses to express herself in a nude state to accentuate her curves and beautiful gift from God.

Playboy has become an inspiration for her writing and blog entries. The empowerment and freedom that Playboy has given her have said to bring light to the model’s universe. “I don’t know what type of girl I would be if it weren’t for Playboy. I always knew intuitively that I was a person by nature, but not until I began posing nude. I instantly fell in love with the idea of showing off my body but also grabbing the attention and “wowing” the fans. 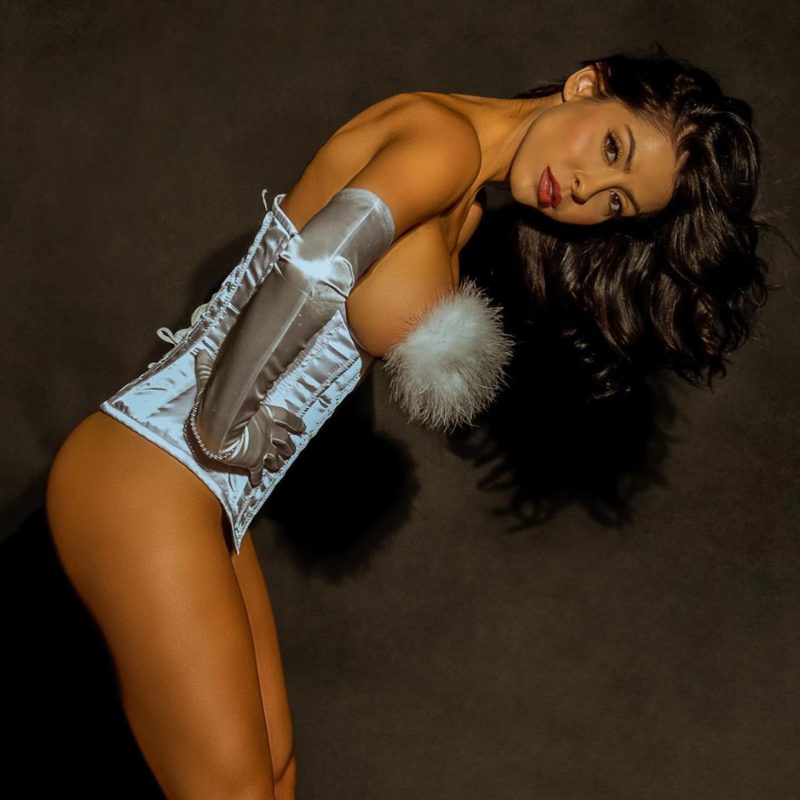 When they see my interviews and hear me talk, they’re almost shocked by how well I speak and present myself.” The model has been a fan favorite for many years. Even from us, we are requesting her presence back! She has worked with Playboy Plus, a franchise of Playboy, and has been featured in three sets that are available online for your pleasure! In an interview, we spoke with the model regarding her dreams with Playboy and what is next for the Playmate. “I would love to have another cover. I admire so many of the photographers inside our circle, and I am dying to work with Ana Dias.

She has such an impeccable eye and knows how to portray the body in the most feminine way. I hope my enthusiasm and writing can catch the eye of the people at Playboy Enterprise in Los Angeles, I would love to become the first Mexican and American Playmate. That would be an absolute dream of mine.” We are hoping her dreams come true. She is genuinely the hardest working and deserving woman in all of Playboy to deserve a title like that. Being without representation is difficult enough. From being denied from multiple agencies for her height and fake breast, Divina has exceeded all our expectations as a model.

Her platform rests on the idea of self-expression, and she hopes to diminish biases against a woman to embrace their personality. Growing up in a conservative Catholic life, Divina was sheltered and did not have the means to express herself in her childhood and young adulthood. It isn’t until Divina moved out of her home at the age of 18 to pursue her dreams of independence and fame that she found her voice. If it weren’t for that, she would never have shot with high-end fashion photographer Eduardo Ceballos for her first feature in Playboy Slovakia.

This is where Playboy Mexico’s editors found Divina and invited her to be a part of the Mexican family. Since then, Playboy Mexico is a family for the model. “Every chance I get, I go to Mexico City. They are the loving family I never had, and they are such fun! All of the Playmates are like sisters. It is literally how you saw it with Kendra and Holly, we are all kind to each other and there for one another. They always have open arms for me when I come and visit and treat me like the princess that I am. I have so much love for this family. They stole my heart the very moment I landed.”

What an honor to be on the cover of @playboymx for the month of September. Not only is it the special sex edition, but I’m coinciding with @kyliejenner ‘s release as well. My heart is so warm and fuzzy with this. I don’t want my month to end ❤️

In her recent visit, she was accompanied by the whole family, including the “Mama Bunny Jeni Summers and Playmate Veronica Flores. Both girls helped Divina on her press tour and were there for moral support and any assistance that she needed during her trip, This type of care and love is commonly seen in Playboy Mexico and is widely admired as a unique type of Playboy Franchise. We all wish that we could be a part of the family just like Divina, but I guess we’ll have to wait and read about it when she decides to share the details! For now, she is our favorite Playmate, and we can’t wait to see more of her hopefully in Playboy America!

This is Not The Irina Shayk We are Used to Seeing

Why Calibration Is Important In Environmental Monitoring